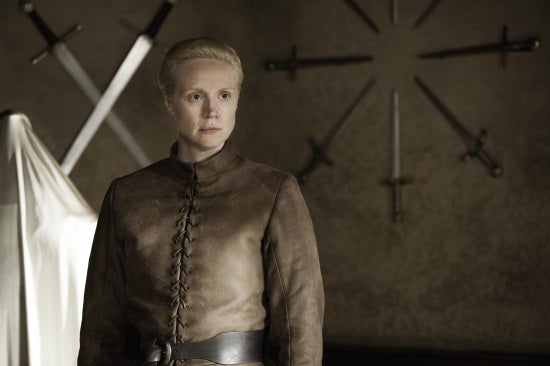 A new episode of Game of Thrones, titled "Oathkeeper," airs tonight on HBO. The series has begun taking more and more liberties with their adaptation, so it's becoming harder and harder to nail down what will occur in each episode. We can still make our best guess though. A lot of characters have a lot of explaining to do in this episode, and some tough decisions to make. Here are four possible spoilers for tonight's episode of Game of Thrones. Jaime, Brienne and Oathkeeper As you likely saw from the episode preview, Jaime Lannister is having a crisis of conscious. Cersei want him to hunt down Sansa Stark, whom she believes colluded with Tyrion to kill Joffrey. But Jaime swore to Catelyn Stark that he would protect her daughters. In the end, Jaime stays a King's Landing, but gives Brienne of Tarth a new set of armor and the Valyrian steel sword, Oathkeeper, that Tywin gave to him. He sends her to find and protect Sansa Stark. It should be a fine culmination of his little redemption arc, or it would be if they hadn't ruined that whole idea by turning Jaime into a rapist. Again with the Coldhands Oh come on! Weiss and Benioff are just determined to play with book-readers' hopes and dreams by continuing to tease Coldhands showing up. I know I previously said that if he didn't show up "The Lion and the Rose" he probably never would, but didn't realize just how little Bran's story was going to progress in that episode. I also didn't' realize that HBO was going to throw a White Walker into the teaser for "Oathkeeper." Could be it Coldhands? Maybe. The episode synopsis does say that Bran and company will be finding shelter, and leading them to shelter is exactly what Coldhands does. On other hand, it seems more likely that the Wight Walker is just the thing that chases them into their shelter instead. Jorah Mormont is revealed to Daenerys It's hard to get the timing right for this one, and impossible to say how they're going to alter it for the televisions show, but it's bound to happen. In the books, Mero, a mercenary captain who was believed dead, appears out of Dany's crowd of followers and attacks Daenerys. Barrister Selmy, still in disguise at this point, stops the attack but is revealed for who he truly is. Daenerys is angry and so Selmy decides to pull Jorah Mormont under the bus with him by revealing that Jorah had been sending information back to Varys in King's Landing in hopes of earning a pardon from the King. Daenerys is furious at them both and sends both men on a suicide mission to breach Meeren's walls. When both come back, alive and successful, Selmy gets bay on Dany's good side by apologizing for his deceit. Jorah is too stubborn for that and insists he did nothing wrong to begin with. Dany ends up banishes Jorah as a result. Obviously this scene will need some altering, since we already know who Selmy is, and it may not happen in this episode if they decide to focus on the anarchy in Meereen instead. Littlefinger reveals his role in Joffrey's Death As seen in the preview, Littlefinger is set to reveal a few details about how Joffrey was killed. It turn out that Sansa was an unwitting participant in the assassination, having smuggled the poison that killed the king into the wedding as part of the necklace Dontos insisted she wear (a hairnet in the books). Littlefinger also reveals that he provided the dwarfs as entertainment, knowing that it would draw Tyrion into conflict with Joffrey, thus implicating the king's uncle.