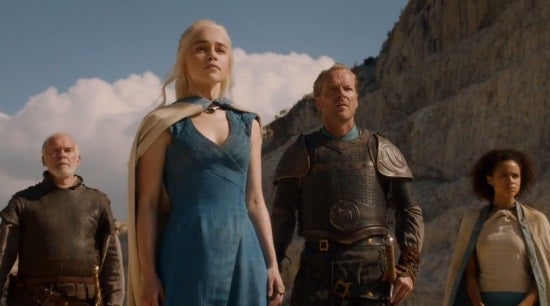 Tonight, millions of viewers will tune into HBO to watch Game of Thrones, and millions more will turn to the Internet to download pirated copies of the broadcast. According to The Guardian, a recent four week snapshot of illegal downloading by security firm Irdeto revealed that Game of Thrones episodes were downloaded almost 1.6 million times in the time span from January 13 to February 9. It was enough downloads to give Game of Thrones the honor of being declared the most-pirated TV show in the world. Other popular shows like The Walking Dead, Breaking Bad, and Mad Men are pirated as well, but likely because HBO is a premium cable channel, more people download Game Of Thrones to avoid paying for HBO. Game of Thrones accounted for a quarter of the 7.5 million illegal downloads that were tracked during the study. In a move that might be designed to try to curb piracy, the Game of Thrones Season 4 Premiere will actually air in the UK at the same time as the US, even though it will be the middle of the night in the UK.

Game Of Thrones Is Most Pirated TV Show In The World