SPOILER WARNING for Game of Thrones Season 4 Episode 9: "The Watchers on the Wall."

Last night's episode of Game of Thrones, "The Watchers on the Wall," was almost entirely a single battle scene taking place at Castle Black, as Mance Rayder's army laid siege to the Wall. Though the episode was full of action and combat, it did also have at least a couple tender moments between certain characters.

First and foremost was the untimely reunion between Jon Snow and his Wildling lover, Ygritte. Jon turned to see Ygritte standing there and smiled, even though she had an arrow pointing right at him.

"I think when he – he's just come through a huge battle, he's almost died – he turns around and see the one person he's ever truly loved – he was close to his father but it wasn't a loving relationship, he never had a mother who loved him – and he sees this woman who he really, truly loved in a very intimate way and I think, even though she's pointing an arrow at him, even though they're in the middle of a battle, there's something incredibly joyous about that moment," says Kit Harington, who plays Jon Snow, in a new video released by HBO. "He doesn't care if that arrows drills through his chest, he's happy."

"When she sees him, she can't control the feelings of love that she has for Jon Snow," says Rose Leslie, who plays Ygritte.

Of course, the reunion doesn't exactly become a happy ending. Ygritte is shot with an arrow and dies in Jon's arms.

"It's a kind of bittersweet ending for them both," says Harington. "It was never going to end happily, and one of them was going to die I think." 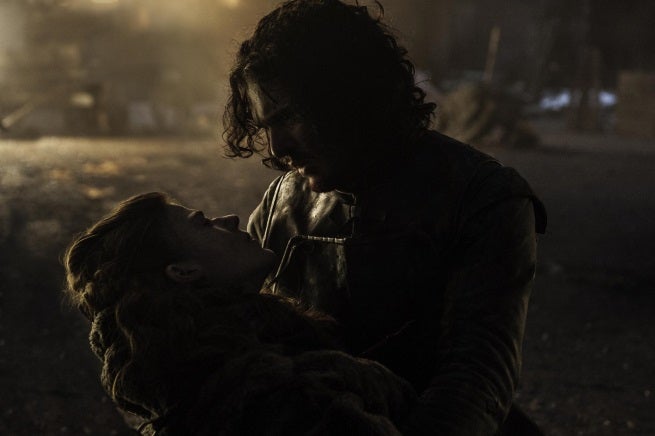