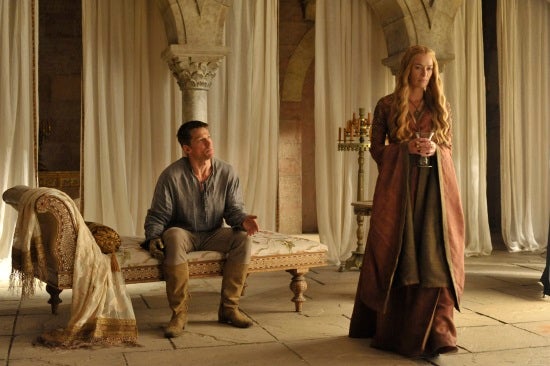 HBO has released four videos taking fans behind-the-scenes of the Game of Thrones Season 4 premiere episode, "Two Swords." The longest of the videos is the "Inside the Episode" featurette with series co-creators D.B. Weiss and David Benioff, who also co-wrote and directed the episode. They discuss the melting of Ice, the addition of Oberyn Martell to the cast in King's Landing, and the symbolic importance of Ice and Needle, the two swords referenced in the episode's title, to House Stark. "It was intentional that we would begin the episode with the loss of one Stark sword, and what Tywin thinks is the death of the Stark line and legacy," explained Weiss, "and end it with finding another Stark sword and the implied rebirth of that Stark ability to act in the world through Arya." In the "Reforging Ice" video, A Song of Ice and Fire creator, George R.R. Martin, explains the history and importance of Ice and the Valyrian Steel that it is made out of. In "Everything's Changed," actor's Nikolaj Coster-Waldau (Jaime Lannister) and Lena Headey (Cersei Lannister) discuss the drastically altered relationship between their characters, now that Jaime has returned to King's Landing without his right hand. In "Exquisite Handiwork," costume designer Michele Clapton discusses the design and creation of Jaime Lannister's golden hand. Game of Thrones airs Sunday nights on HBO.