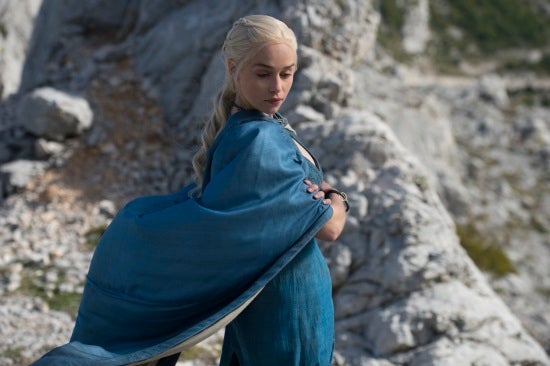 When you have an ensemble cast as large as the one in Game of Thrones, season premieres can be a tricky thing. It's been months since audiences have seen any of these character, and you want to make sure to touch base with all of them. At the same time, it's important to set the tone for the season going forward and not dwell too much on what has come before. The season 4 premiere of Game of Thrones, directed by co-creator and showrunner D.B. Weiss, manages to successfully pull off this balancing act, checking in with established characters, introducing new ones, and pointing the way forward for the show's narrative. The episode begins ominously, with the breaking of one blade and the forging of two others. We learn about one of these blades quickly enough, but the fate of the second is still a mystery. The biggest new addition to the show is Oberyn Martell, played by Pedro Pascal. Oberyn is important because he doesn't just serve as a new player in King's Landing, but also as our first taste of Dornish culture. For those who don't know, Dorne is possibly the most unique of all the Seven Kingdoms. They were the only kingdom not to fall to Aegon the Conqueror, only becoming a part of the Seven Kingdoms through a marriage alliance 200 years after Aegon's War of Conquest. As such, they maintained a distinct identity and have the unique custom of allowing females to inherent titles (Arya's direwolf, Nymeria, was named after one of Dorne's warrior-queens). Pascal does an excellent job of conveying typically Dornish traits. He's fiery, intense, passionate, and unpredictable. His scene with Tyrion (Peter Dinklage) is one of the most enjoyable in the episode. Oberyn's presence, alone, goes a long way in conveying the amount of tension in King's Landing. You would think, with their seeming victory in the War of Five Kings that the Lannisters would be planning to live happily ever after, but that's not the case. Cersei treats Jaime with surprising coolness, still bitter at what she feels was an abandonment on his part. Tyrion is still trying to figure out how to navigate his forced marriage to Sansa Stark, Tywin Lannister is continuing to ask more of his children than they truly want to give, and Joffrey is…well, still Joffrey. On top of that, their "allies," the Tyrells, are clearly up to their own plots and Oberyn Martell would like nothing more than to kill every member of House Lannister, one by one, but must be treated as an honored guest for the royal wedding. Seeing the Lannisters try to navigate their way through this web of intrigue is the kind of thing that Game of Thrones does best, and should be one of the most enthralling threads of the season. Ygritte and Jon Snow, now separated, don't have a whole lot to do in this episode, but their scenes set them up well for the future. Ygritte's scenes are mostly used to introduce the Thenns, a brutal and terrifying tribe of Wildings come to join Mance Rayder's army. Jon Snow is seen standing trial for his apparent sins against the Night's Watch. Snow does little himself, but his accusers prove suitably antagonistic and Maester Aemon gets a chance to really steal the scene. Daenerys' scenes move slowly as well, mostly re-familiarizing viewers with her current mission and state of being. She's on the road to Meereen, the largest city in Slaver's Bay, but she seems to be taking her time in getting there. There is at least one strong bit of foreshadowing in the scene with her trio of dragons. The rest of the scenes with Daenerys are a little distracting due to the recasting of Daario Naharis, Dany's would-be paramour. Michiel Huisman replaces last season's Daario, Ed Skrein, and looks and acts nothing like his predecessor. Skrein's Daario was made to look pretty to the point of severity, where Huisman has more of a rugged, Aragorn from Lord of the Rings look to him. Skrein's Daario was equally severe in his romantic gestures, bringing Dany the heads of his captains and the flag of Yunkai, but Huisman's is reduced to simple flowers. Maybe toning Daario down a bit was part of the reason for the recasting, and it will probably be less noticeable as time goes one, but it's pretty jarring at first. The real show stealers in this episode are Sandor "The Hound" Clegane and Arya Stark. I won't spoil exactly how things go down, but the chemistry between Rory McCann and Maisie Williams is stunning. The relationship between the Hound and Arya is perfectly portrayed as half hate and half necessity. They don't like each other, but, at this point, neither stands much of a chance of surviving without the other. When the two run into some trouble, the tension is drawn out perfectly and the release is insanely gratifying. These kind of cathartic payoffs are few and far between in Game of Thrones, so savor this one for all its worth. "Two Swords" is an absolutely stellar premiere. Where many of Game of Thrones' weaker episodes struggle with pacing, this episode nails it, opening with a deep hook, using the slow build points of individual plot lines as a strong center, and finishing with one of the most intense and gratifying scenes of the entire series. You'd think that finally seeing a new episode of Game of Thrones would leave fans feeling satisfied, but this episode will only leave you hungry for more. The Game of Thrones Season 4 Premiere, "Two Swords," airs Sunday, April 6 at 9 p.m. ET on HBO.