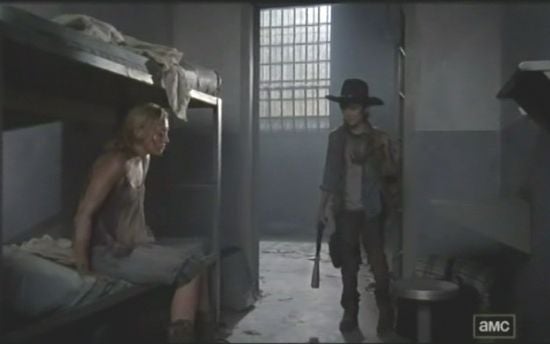 In an online bonus segment for The Talking Dead, producer Glenn Mazzara talked about the potential romances that have everyone buzzing about season 3 of The Walking Dead. In the season premiere, Carol appeared to be flirting with Daryl after he massaged her hurt shoulder. When a caller asked Glenn Mazzara if Daryl and Carol were going to get together, he said, "You'll have to watch, but I think Carol would actually want that. We'll see what happens, but what I like about that scene is that you see Carol so changed over the winter, that she can joke around. She's kind of teasing him, giving him a hard time, and I think she's kind of playful and stuff, flirty." Host Chris Hardwick added, "What I think is kind of brilliant about it is that sometimes on shows you feel like they just had those two characters get together, because they were there, and they had to. But in my mind, he totally fits the profile of a dude that she would go after, kind of a little hard, emotionally unavailable, kind of pushes everyone away." Mazzara then pointed out the potential issue of dating in a post-apocalyptic world if it doesn't work out, as in the case of Rick and Lori. Hardwick joked, "It sucks so much to break up with someone, and now I've got to stay in the group, and see them all the time. It's not like they can move across town." While Rick's relationship might be dying, his son Carl seems to be fairing better. One of the biggest stories out of The Walking Dead panel at New York Comic Con was when Chandler Riggs, who plays Carl, revealed that there might be something going on with his character and Beth, who is four years older. When Glen Mazzara was asked if Carl was in fact nursing a crush for an older woman, he said, "I believe he is. Yeah, it makes sense. She's cute."