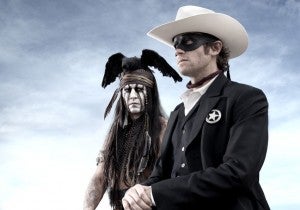 According to a press release just made available by Walt Disney Pictures, singer-songwriter Jack White will write, produce and perform the score for their upcoming adaptation of The Lone Ranger, starring Johnny Depp and Armie Hammer. The announcement seems perfectly timed, as White's new album Blunderbuss is in stores and on iTunes today, accompanied by a press blitz and a feature story in last week's Rolling Stone. The singer-songwriter has been a journeyman for much of his career, never doing more than a few years with any given band, but this is his first solo outing. To put it all in Disney's words:

The Walt Disney Studios announced today at CinemaCon that Jack White will write, produce and perform the score for Walt Disney Pictures and Jerry Bruckheimer Films' highly anticipated The Lone Ranger. White, who today released his first solo album "Blunderbuss" to critical acclaim, is a musician, singer, songwriter and producer who first achieved notoriety as the lead guitarist and vocalist of the rock band The White Stripes and then as a member of The Raconteurs and The Dead Weather.  The Lone Ranger will mark White's first foray into feature film scoring. The Lone Ranger, directed by Gore Verbinski and featuring Johnny Depp as Tonto and Armie Hammer as John Reid, the Lone Ranger, is a thrilling adventure infused with action and humor in which the famed masked hero is brought to life through new eyes. Native American spirit warrior Tonto recounts the untold tales that transformed John Reid, a man of the law, into a legend of justice—taking the audience on a runaway train of epic surprises and humorous friction as the two unlikely heroes must learn to work together and fight against greed and corruption. The Lone Ranger is produced by Jerry Bruckheimer and hits theaters May 31, 2013.

The Rings of Power: Netflix Offered More Money for Lord of the Rings Rights Than Amazon

Gundam: The Witch From Mercury Goes Viral Thanks to Its LGBTQ Romance