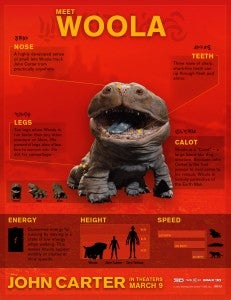 In spite of disappointing domestic box office returns last weekend, Disney's John Carter fared pretty well in the international market and the studio is still looking to promote it, possibly hoping that it can retain its #2 ranking this week with The Lorax fading into a third-week sunset and only 21 Jump Street to speak of in terms of big-name competition from this week's releases. In that vein, they've released an extended clip featuring Carter and Woola, full of cool effects, a view of Mars (as a functioning society as opposed to a war-torn wasteland) not really seen in previous trailers and a sequence that could be described as a shorter, cooler version of the pod race sequence from Star Wars Episode I: The Phantom Menace. Check it out below, along with the infographic at left, to give those of you who maybe missed it last weekend and are considering a matinee in the second week of release an idea of what to expect.