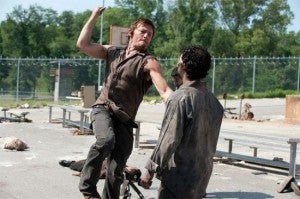 In an interview with Sirius XM radio, Norman Reedus, who plays Daryl Dixon, shared some details about Season 4 of The Walking Dead. Norman Reedus said, "The scripts this season are just amazing. The sets are crazy. It feels like we've shot about three movies already. It's super intense, and everything's for a specific reason, and it's great right now." When asked about how producer Gale Anne Hurd said that the threat of the Walkers was being amped up for Season 4, Norman Reedus replied, "We've filmed a lot of what Gale's talking about. It's true. She hit the nail right on the head. They've introduced a way to make zombies scary again, and they're terrifying. The new threat is just unreal. I can't of course tell you what that is, but it's brilliant writing." In regards to if anything had changed with Scott M. Gimple now running the show, Norman Reedus said, "Yes, of course, with new people there's chance. But also, when Frank was the showrunner, Glenn was his number two, so we knew Glenn. And when Glenn took off, we already knew Scott. As far as the internal group, we're all the same people, but the structure of the writing's a bit different, and it's so intense. These are our best scripts so far." When asked how Daryl feels about the people from Woodbury coming back to the prison, Norman Reedus said, "Daryl's got a little bit different responsibility right now. We all do. People have sort of fallen into their crevices so to speak, who they are within this group and what they contribute. There's a whole bunch of different elements to that. When you find people that are alive and can contribute and help build something, everyone takes a helm and everyone takes responsibility for it. There's also all these new personalities as well, you just have to watch." When asked how Merle's death had affected Daryl, Norman Reedus said, "That day sucked for me personally. Michael Rooker's a good friend of mine. It sucks when you do scenes like that, because you read the script and you go, 'Ok, this day's going to suck.' And it did. But as far as Daryl's character, I think he grew up a lot in that moment. He got hard." Norman Reedus added, "The thing about having a big brother sort of under his thumb for awhile, he wasn't there except for that one hallucination that he had in the Chupacabra episode. I think he sort of during that time started to become this man that he was never going to be before. And when he was reunited, he kind of reverted back to little brother mode for a little while. If you noticed in that arena scene, it's all about me connecting with Rooker."