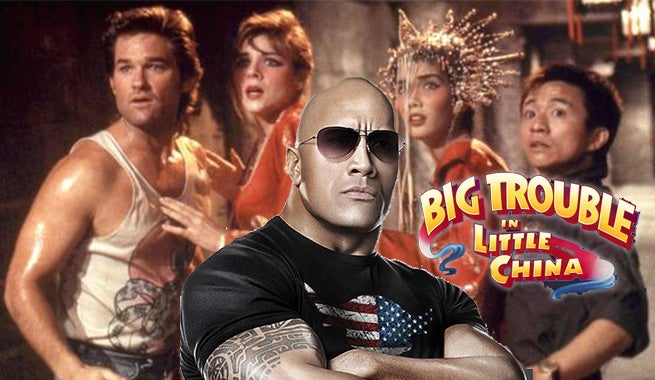 Although Dwayne "The Rock" Johnson is set to star in the Big Trouble In Little China remake, he and John Carpenter, director of the 1986 original haven't spoken.

"It's very early in the process. I haven't spoken to Dwayne Johnson about any of this," Carpenter told The Wall Street Journal.

Johnson recently starred in San Andreas - the disaster film where most of California was completely destroyed. In the Big China remake he'll be back in San Francisco, as Kurt Russell was in the original, playing the silly hero Jack Burton. Carpenter doesn't think Kurt Russell can be replaced, but realizes Johnson has the ability to never take himself too seriously. "It would be hard if not impossible to replace Kurt Russell as Jack Burton," Carpenter explained. "On the other hand, Johnson has a comic touch in his performances, so perhaps."

Do you think Johnson needs Carpenter's blessing as he moves forward with Big Trouble In Little China? Like many fans who heard the news, Carpenter says he is "ambivalent" about a remake. But - would he return to work on the remake? "On the other hand, it depends on how much they pay me."

Are you excited for Johnson's Big Trouble In Little China remake?