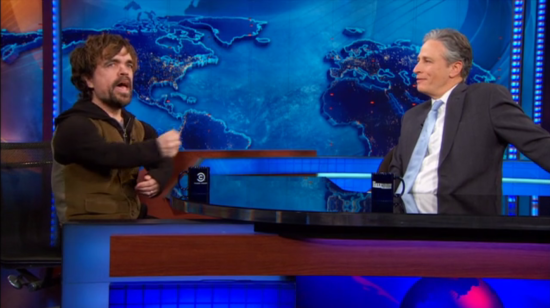 On last night's episode of The Daily Show with Jon Stewart, Stewart and guest, Peter Dinklage, discussed what went into keeping secrets on projects like Game of Thrones and X-Men: Days of Future Past. Stewart asked Dinklage if there was some way they kept the actors from revealing spoilers themselves, "I never read any contracts I sign," said Dinklage. "I'm sure its hidden deep inside 'amendment 5.'" Stewart asked him about lurkers trying to sneak peeks during filming. "Camera phones are very popular on set," Dinklage said. "In Croatia [one of the filming locations for Game of Thrones], we have this just enormous guy, and that's his job…And he will yell at them in Croatian and its terrifying. But he will just take your phone and throw it. And it's so refreshing. I wish I had the nerve to do that." Stewart and Dinklage then joked about what it must be like for that guy to come home from work, with Dinklage pretending to be his wife and asking, "How many phones did you throw today?" Game of Thrones Season 4 premieres April 6 on HBO.