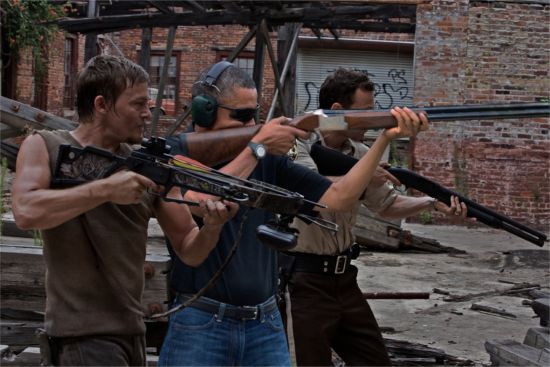 Remember that rumors that The Walking Dead is going to have a surprise guest star during the second half of season three. It looks like all that skeet shooting could come in handy for President Barack Obama as he takes aim at some zombies on The Walking Dead. Well, despite the photo above, we're pretty sure that President Barack Obama is not actually going to be the surprise guest star. The photo showing President Obama alongside Deputy Rick Grimes and Daryl Dixon of The Walking Dead is just a very well done photoshop that has gone viral on Reddit. We imagine when the White House released a photo of President Obama skeet shooting to silence doubters that he actually engaged in the hobby that they weren't envisioning this happening. Of course, they probably should have in this day and age of Internet photo mashups. The Walking Dead mid-season premiere airs on Sunday, February 10 starting at 9 PM ET on AMC.