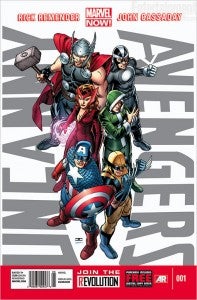 In spite of a coordinated effort by Marvel Comics to outsell The Walking Dead #100 by copying that successful issue's variant-cover business model and offering retailers deep discounts for high-quantity orders, Bleeding Cool is reporting that Uncanny Avengers #1 will fall short of Marvel's hopes and The Walking Dead #100 will remain the best-selling single issue comic of 2012 (and in fact since 1997). The issue, which hits the stands on Wednesday is the kick-off point for the Marvel NOW! relaunch and will be bolstered by a number of midnight release parties around the country just before New York Comic Con. It seemed that could all be the perfect storm to drive sales and interest. The two best-selling issues of the last couple of years were The Walking Dead #100, which did the same thing just before San Diego Comic-Con International in July, and Justice League #1, which was the kickoff event for DC Comics's similarly-ambitious New 52 relaunch last year.