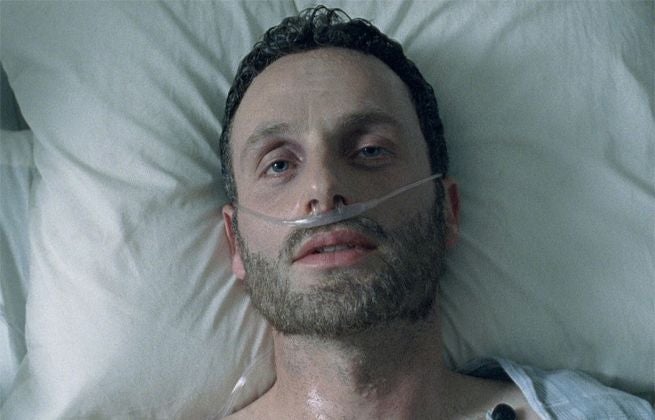 One of the most common theories about how The Walking Dead will end is that it will end with Rick Grimes waking up in the hospital. The theory goes that after Rick got shot that he never really woke up from his coma. Everything that's been happening on The Walking Dead is just Rick dreaming while still in his coma.

While this theory might make sense from a story perspective, it doesn't make sense from the perspective of why would Robert Kirkman do the most obvious ending and one that would likely be universally hated. Ever since the TV series Dallas used a dream to explain away an entire season of the show, fans have hated the very concept of the "it was all just a dream" ending.

Luckily, Kirkman has just gone on record to officially rule out the possibility of this particular ending. In response to an Uproxx article on the coma fan theory, Kirkman tweeted, "Going on record to answer this: Rick is NOT still in a coma. The events of TWD are definitely happening."

Of course, this clarification comes as a big relief. However, Kirkman couldn't let it die with his answer, and he threw out one last tease at fans. Kirkman added, "But Carl and everyone else are all imagined. He actually NEVER found his family. He's been crazy since he killed his first zombie. #joking?"

The Walking Dead Season 5 is currently airing on Sundays at 9 PM ET on AMC.