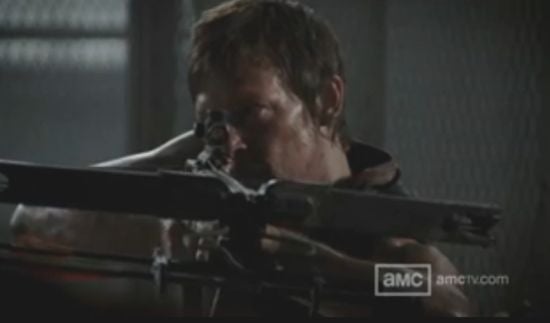 The Walking Dead season 3 has gotten off to a great start with a lot of intense action. In a new video released by AMC, fans are given a look behind the scenes of the "Sick" episode of The Walking Dead. In the clip, the actors actually reveal some great insight into the motivation of the various characters. When the prisoners showed up right after Rick chopped after Hershel's leg, the group seemed to for the most part to continue to focus mainly on saving Hershel. Andrew Lincoln, who plays Rick Grimes, explains, "I said we've got to play it like forget about the human threat, forget about these guys, just think about we've got a man down, we need to get him back." The only one of the group that did stay focused on the prisoners was Daryl. In the clip, Norman Reedus, who plays Daryl, explains, "Daryl doesn't want anybody else. I think he would rather just kill them and get rid of them." Reedus also provides some insight into Daryl's relationship with Rick. Reedus says, "He's finding worth watching this dude's back. He's like his Tonto." One of the most often debated points from fans about the "Sick" episode is whether Lori Grimes helped save Hershel because she cared about him or because she knew he was the only one that could deliver the baby. Sarah Wayne Callies, who plays Lori Grimes, offers the following insight, "I think Lori starts to get a small sense of the redemption that she's been hoping for. The first thought is 'I've paid the debt, you saved my son.' I think Lori's been sitting there the whole time thinking he's owed a miracle."

The Walking Dead Behind The Scenes: Daryl Is Rick's Tonto