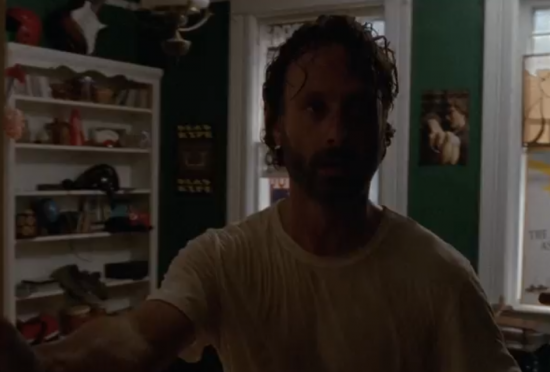 Last week on AMC's The Walking Dead, series creator Robert Kirkman got a plug in for his Skybound comic Super Dinosaur, which was pretty easy to spot and widely recognized that night. What was somewhat less easy to spot -- so much so that most people didn't notice it at all until it was referenced on Talking Dead tonight -- was a cleverly-placed poster for The Boondock Saints, which appeared not only in last week's "Claimed" but also in the midseason premiere, titled "After." In the house where Rick and Carl are staying, there's a room made up to be obviously a teenger's or college student's room. Amid the WPA and other kind of arty posters hanging on the walls, there's a Boondock Saints poster. You can see it to the right of Rick in the image above. 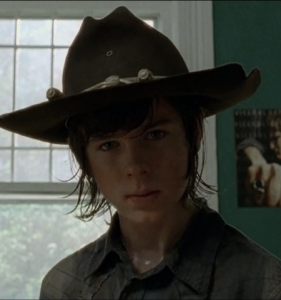 You can also see it behind Carl in the image at right from "After." According to Talking Dead, Reedus had no idea the poster had been inserted--but it's not the first time there's been a close call with getting The Boondock Saints  some love on the show. "You know what I did?" Reedus told us last summer at San Diego Comic Con International. "It got cut, but when we were in the car last season, and we're driving–we come out and he hears the phone call? I picked up stuff–I picked up a bunch of rope, wondering if people would pick that up. And it got cut out, but there was a thing which I don't even know if I told anyone." Special effects guru Greg Nicotero noted that the scene in question–wherein the characters were at a National Guard checkpoint or depot–was cut in its entirety, so it's not likely anyone was intentionally keeping Reedus's joke out of the episode. We can only hope he finds another opportunity… …You never know what you're going to need rope for, after all.