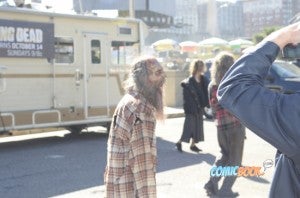 While ComicBook.com was lining up for the actual panel, a reporter from The Lehigh Valley Live was inside the press room at New York Comic Con, covering it for that site. A friend of the site passed along this list of the high points. So, what did reporters hear that fans may not have? Robert Kirkman, series creator and executive producer: "[This season] shows a progression of time really well, and how other people outside of Rick and his group have adapted to what's going on." David Morrissey, who plays The Governor: "With the security [The Governor] has built around him, he has time. He can contemplate the future. He can plan it. But with Rick's group they are just trying to get through tonight. They are thinking in just those small terms." "I think The Governor believes that if he can keep his group together and they do as they are told and do what he wants, that's were he gets strength from, because he's looking at the bigger picture. That is a heavy mix of power that you have right there. And what he does with that is what gets him in trouble." Andrew Lincoln, who plays Rick Grimes: "All the kills and bad calls weigh heavily on Rick and change him. The Governor is able to compartmentalize that. It doesn't erode his soul. I think Rick feels every single death." Danai Gurira, who plays Michonne: "Michonne is a woman who is an intense and very able woman. She is very capable and self-reliant. She's re-created herself in this time of absolute dire apocalyptic shutdown into a very formidable, capable individual."