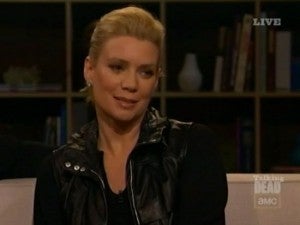 In the Arrow On The Doorpost episode of The Walking Dead, The Governor reveals to Rick that he knows about the love triangle between him, his wife Lori, and Shane. The Governor says, "Andrea told me about your baby. That it might be your partner's. But you're caring for her, and I admire that, restitution for your own lack of insight for failing to see the devil right beside you." However, during tonight's episode of Talking Dead, Chris Hardwick asked Laurie Holden, "Did Andrea tell The Governor about Shane and the love triangle? Do you want to clear this up?" Laurie Holden replied, "Are you out of your mind? I hear this all the time. Andrea did not tell The Governor about baby Judith and Shane. You have to understand he is a sociopath. Sociopaths lie. They manipulate. So he may say things to mislead but that is not the case." Holden continued, "I mean do I think that during the honeymoon period before I learned that he was a sociopath I told him probably about these beautiful people that I hung out with and Rick and Shane and the fact that she was pregnant and my god I hope that she's ok. But that could have come from Tyreese, that could have come from Sasha, that could have come from one his spies. But at that stage of the storytelling Andrea would never sell out her friends and give him ammunition. So that's just kind of an example of what a cunning, cunning sociopath he is." However, how would Tyreese and Sasha have known about Shane? It's probably not something anybody at the prison would have shared with them. Andrea also suggests that the information could have come from one of The Governor's spies, which raises the question of who could be a spy at the prison. Could Merle secretly be a spy? And if so, why would anyone have shared the information with Merle?