It's the midseason finale of AMC's The Walking Dead and, as many have pointed out, the fundamental setup now is exactly as it was eight episodes ago when season three was wrapping up and promised us a no-holds-barred war between Rick and his group of survivors and the forces of The Governor. Last time around, it ended with The Governor taking out a number of his own people, who had run away with their collective tails between their legs. This time, the bad guys have a tank. How does it go down? Well... The episode begins with The Governor trying to sell his new camp on the idea of taking the prison; he claims the people who live there are terrible people--that they mutilated him and killed his daughter. The talk is intercut with the shot of The Governor watching Rick, Carl, Hershel and Michonne outside of the prison gates, and of Rick's group setting fire to a pile of bodies. On the way back from burning the bodies, before they get back into the gates, The Governor knocks out Michonne from behind a tree and takes Hershel and Michonne hostage; he tells the group this, and promises no casualties if they take the prison using them as leverage. Everyone agrees to join up--except Lily, who comes to The Governor after the speech, saying that she doesn't like the idea of killing people--that she'd already told him they didn't need to fight for a new place. He tells her that he loves her--and that she needs to pack up, too. In his camper, The Governor has Hershel and Michonne tied up; he cleans their sounds and gives them some food, telling them that it's going to be a long day. He tells Hershel that nobody is going to hurt them; Hershel doesn't believe him and wants to know what's going on. The Governor tells Michonne that he's come to accept that Penny was dead when Michonne took her out; that he has no desire to hurt anyone and he just wants the prison. Hershel tries to convince him that the two groups can share the prison if he's serious about that, but The Governor thinks that's not realistic; he'll never be able to live together with Rick and Michonne. Hershel reminds him that his willingness to kill to take the prison means he's willing to kill Hershel's daughters; he asks how he can be willing to do that, if he knows the pain of losing a daughter, and The Governor tells him because Maggie and Beth aren't his daughters. Half an hour later, everyone is headed to the prison and The Governor drops Lily and Meghan off at the side of the river, telling her that walkers can't make it through the water and so they'll be safe waiting there for him while he's at the prison. She still objects to trying to take the prison but he tells her that it's so they can survive--anywhere really safe will have people there; He approaches Meghan to get a hug before he goes. Back in the prison, Glenn is half-awake in a cell with Maggie watching over him; he jokes about taking an anniversary vacation and Maggie tells him about a place Hershel took her as a child. She tells him she's going to get him some water, and he says he can do it--but she says she will anyway. Daryl is angry with Rick about expelling Carol; Rick is defending his actions, but it's making little headway. Daryl asks what to do about the two girls Carol had been taking care of, and Rick says he promised her they'd be looked after.. Rick hasn't yet told Tyreese that Carol was responsible for the killings; Daryl says he'll come with him and see how Tyreese takes it. In his cell, Bob is brooding over a shoebox when Sasha shows up. She thanks him for helping Hershel save her life; he tries to object but she doesn't want to hear about it. He tries to chase him through the prison to talk to him when he leaves, but starts to get weak and leans against the wall for support. Rick and Daryl come upon Tyreese in the Tombs and he tells them their news will have to wait; that there's something they need to see. He leads them to a room where there's a dissected rat nailed to a board. He tells them he believes it's the same person who killed Karen; that they have to find out who. Rick starts to tell him it's not the same person, but before he can elaborate, there's a blast that shakes the ceiling above them. The survivors (those who can) run to the fences, where they see The Governor's party--a line of cars flanking a tank. The Governor summons Rick down to talk. Rick starts to decline, saying he has to confer with the council, and The Governor brings out Hershel and Michonne. He tells Rick that he's making the decisions today. Daryl, Tyreese and Sasha starts to formulate an evacuation plan, even though they're low on supplies and their numbers have shrunk due to the plague. Rick and Daryl exchange looks and Rick tells Carl something before he goes down to see The Governor. The Governor gives him until sundown to clear out of the prison, and while Rick objects that there are sick people inside who won't survive the trek, including children, The Governor stands firm. Daryl and Bob stand at the fence line, handing out guns and watching The Governor. 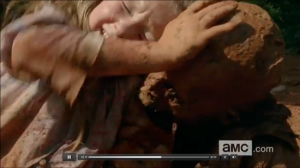 Only Murders in the Building Fans Shocked by Latest Episode