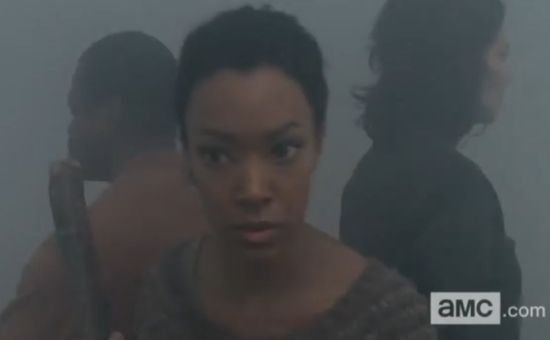 Official logline: As one group finds what may be an ideal shelter, another group comes to realize that the best protection comes from those around them.

The episode opens on Bob Stookey; he's scruffy, with longer hair, disheveled clothes and facial hair. It's hard to tell at first whether this is the future, or the past...but it's clear that he isn't with Sasha and Maggie. He's not smiling anymore, either (like we've seen him do since the fall of the prison). He's dour, shuffling through the world and looking like The Governor in the first of his two solo episodes earlier this year. He guzzles bottles of cold medicine, hangs just out of walkers' grip and taunts them (or himself?) with the prospect of making him a meal. Sleeps where he finds high ground and a flat surface...until finally he's met by Daryl (on his motorcycle, thus cementing this as the past) and Glenn (in a truck). They ask him Rick's three questions (How many walkers have you killed? How many people have you killed? Why?) and when they like his answers, invite him back to stay with them. They're surprised when he has no follow-up questions for them, but he tells them that it doesn't matter who they are. Cut to Maggie, Stookey and Sashs, standing back to back to back in a circle in a foggy clearing while walkers snarl in the distance. After a flurry of combat, including some near-misses (a walker got a mouthful of Bob, but it turned out to be on top of the bandage from his gunshot wound and he was saved). Sasha hugs him enthusiastically--which hurts, becuase after all he's recently been shot. But he doesn't want her to stop. 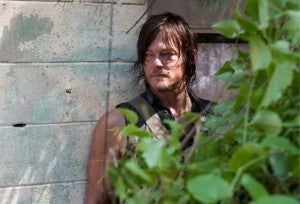 Cut to Daryl giving Beth crossbow lessons. He's teaching her how to track, how to figure out what they're tracking. Beth says a walker, Daryl says a drunk. Turns out she's right -- and when she tries to get the gun off of it, she steps on an animal trap and gets her foot caught. Daryl takes out the walker and goes to check her out. Back to the trio, they need to move. Maggie's compass is broken, so Stookey says they'll use the sun to navigate. Back with Beth and Daryl, she can move her foot, so it's not broken...but she's in pain, and once they're in a clearing, she asks to sit down and rest. The clearing is actually a cemetery, and rather than sit down on the grass, Daryl gives her a piggy back ride to someplace with a seating area. Beth suggests that in the caretaker's house, there might be people. Daryl says that if there are, he'll take care of them. "There are still good people," Daryl," she says, but he tells her that he doesn't think the good ones survive anymore. Before they make it there, the pair stop at a grave marked "Beloved Father." Daryl picks some wildflowers and places them on top and the two hold hands in silence for a moment. Following the railroad tracks, the Three Amigos find a sign for Terminus/Sanctuary. Maggie wants to go, sure that if Glenn were to find such a sign, he would go there to look for her. Sasha cautions that if something sounds too good to be true, it probably is, but ultimately grudgingly agrees to go when Bob and Maggie team up to vote. When Daryl and Beth get into the house, someone has clearly been tending to it. It's fancy, clean and well-stocked. There's an embalmed body on display in a coffin in the front room, and when Daryl touches its makeup, it's clear the body used to be a walker (though it doesn't particularly look like it now). There's another one in the basement, on a morgue table, when they go downstairs to get medical supplies. Beth is inspired by the walker "funerals," and the idea that whoever did this still believes people deserve respect in death. Daryl first dismisses the idea but seems to come around. Back at the camp with Stookey and Sashsa, Bob wakes up to find Maggie gone to look for supplies. Sasha tries to talk him into forcing Maggie to camp with them at the next fortified location they find in a city along the railroad tracks, but Bob tells her that he thinks she's just scared that if they reach Terminus and Tyreese isn't there, that means he's dead. She denies that she's scared. At the caretaker's house, Daryl and Beth are sharing a meal from the well-stocked pantry. Daryl, seeing that there is no dust on any of the food, decides that whoever owns it is still alive and will come back. He decides to take only a little and leave most of it. He goes to set up a makeshift "alarm" outside with scrap metal on a rope. When he returns, Beth is playing the piano. He lays in a coffin ("the comfiest bed I've had in years") and listens to her. At the encampment along the railroad tracks, Sasha wakes up to find Bob sitting silently a few feet away. Something is clearly wrong. When she comes around to him, he's staring at a message scrawled in the dirt: "Don't risk your lives for me. Good luck." They decide to pursue Maggie anyway, with Bob still insisting that they follow her to Terminus and Sasha thinking that she can talk one or both of them into staying somewhere along the road. On the tracks, Maggie sees another sign for Terminus. She takes out her knife, seemingly ready to carve a message into the box it's posted on, but a walker starts toward her. She takes it out and smiles. Down the tracks a while, why is Bob still smiling? Because he's not alone. His first two groups either died or scattered to the wind and he was left entirely on his own. After the fall of the prison, he changed that luck. The pair come upon a message scrawled in walker blood on the side of the railroad switch box: "Glenn, Go To Terminus. Maggie." 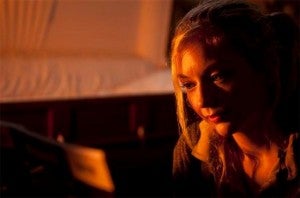 Back at the house, Daryl carries Beth into the kitchen to have dinner. The "alarm" sounds and he goes to check on it. There's a mangy dog on the porch that yelps and runs away when he reaches out for it. That night, Stookey and Sasha hear walkers somewhere in the distance while they sleep out. They cant see it, and Sasha tries to persuade Bob to sleep so he can heal but he won't/can't. He asks her why she thinks Tyreese is dead, and she doesn't answer. He changes the subject, flirts a bit, and lays back down. Back at the house, Beth is leaving a thank you note for the homeowners. Daryl suggests that they stay a while and try to "make it work" when the people who live there come back. Beth asks what changed his mind and made him believe in good people, and he tells her that it was Hershel. They hear the dog again, and when Daryl goes to the door to try and let it in, he's swarmed by a dozen walkers. He gets away from them but tells Beth to leave. At first she won't, but then he tells her that he'll meet her outside once he's taken out the walkers and she goes. He runs himself out of crossbow bolts killing off walkers, then barricades himself behind the autopsy table and kills a bunch more with medical tools. Eventually he clears a path to make his way outside, where he finds Beth's bag on the ground. A car peels out and drives away. On the tracks, Stookey and Sasha see another note from Maggie. Daryl is tracking the car until the tracks run out. Exhausted, he sits near a railroad crossing in the street to breathe, despondent. Along the tracks, Sasha sees a large, brick building and wants to stop. Bob won't, saying that Beth is alone and he can't do that to her. When Sasha reiterates that she isn't afraid of anything, just trying to do what's right for the two of them, he kisses her. When it doesn't change her mind, he goes on without her. She watches him leave, then makes her way into town. Once she's in front of the building in question, she makes her way up the stairs and finds a loft on the top floor: totally empty, with hardwood floors and a lot of natural light. She looks out the windows, still seeming upset, and looks at the horizon in the distance behind Maggie's broken compass. As she does, she sees Maggie lying on the ground surrounded by twice-dead walkers. Thinking she might be dead, Sasha pushes the window pane to get a better view--and it falls from the top floor, shattering. Maggie -- who was sleeping, using the scent of the dead walkers to hide -- wakes up startled, with walkers making their way toward her. Sasha panics and makes her way down, and the pair of them take out a small herd of walkers together. When Sasha asks her what she was doing, Maggie admitted that she had heard Sasha's conversation with Bob and had stopped in town to wait for them, in case Sasha convinced him to play it safe. She says that she has faith Glenn is alive, and she can't ignore that...but that she needs their help, and can't do it alone. Sasha admits that she's been scared, but the two resolve to find Bob and head for Terminus. 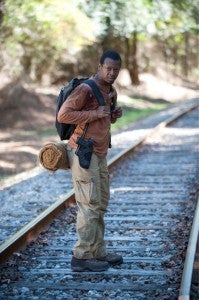 Daryl is still sitting, seemingly lost, in the middle of the road when he's surrounded on all sides by six men: the leader, introducing himself as Joe, speaks and it's one of the men from the "Claimed" episode a few weeks back. This is reiterated when one of the men tries to "claim" Daryl's vest as the group surrounds him for the kill. Daryl punches Joe in the mouth, sending him sprawling back, but before the posse can kill him, Joe tells stops them. He says that he trusts bowhunters because if you're carrying a gun, you could have been anything before the apocalypse but a bowman is a bowman, and is useful. He tells Daryl that if he joins up with their group rather than fighting, they won't kill him. "Why hurt yourself when you can hurt other people?" He asks. Bob is walking, silent and sorry, down the tracks, alone as he was in the opening shots. Once the girls catch up with him, he's all smiles. In the final shot of the the episode, Glenn happens across a railroad switch box with a Terminus map on it.

Deepa & Anoop: Get Your First Look at a Clip From Mattel's New Series (Exclusive)