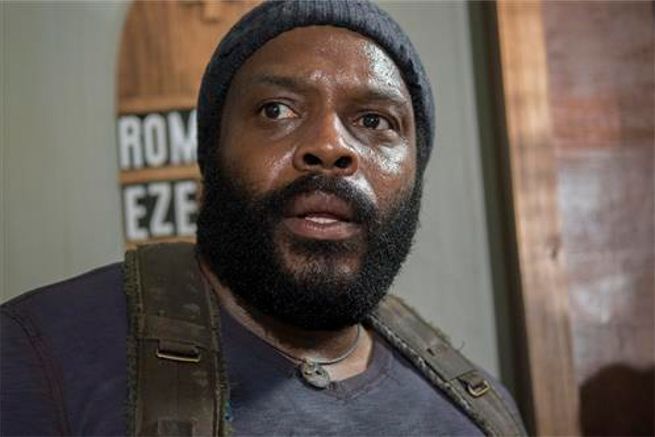 The "Crossed" episode of The Walking Dead opens with Sasha chopping up a church pew with an axe. Tyreese and Daryl are pulling the pipes from a church organ. Daryl glances over at Sasha taking her anger out on the church pew, and Tyreese tells Daryl that it's good that he wasn't here for it.

Daryl takes the organ pipes outside and uses it to build a barricade. Father Gabriel asks if they are going to take the cross to, and Daryl says, "If we need it." On the side of the church, Rick, Michonne, Carl, and Noah are boarding up the windows. Rick is talking to Michonne about how Daryl wants him to go to Atlanta to rescue Beth and Carol. Michonne says that Rick doesn't have to go that she'll go instead, but Rick says he owes it to Carol to go.

Rick, Daryl, Noah, Tyreese, and Sasha take off for Atlanta. Michonne, Carl, and Father Gabriel stay behind to watch baby Judith. Father Gabriel sees blood on the church floor and starts frantically trying to scrub it off.

Tyreese and Sasha are alone in the back of a truck. Tyreese tells Sasha that she knows he's been there. He starts to say Bob would have wanted her to, but Sasha interrupts and says please don't.

Beth is working in the hospital. Beth wheels her mop bucket around to look in on Carol. Dr. Steven Edwards comes in and asks Beth to excuse him that he's just checking on her.

At the first truck, Glenn is tending to Eugene, while Abraham is still on his knees. Glenn goes over to talk to Tara, and Tara reveals that they are running out of water and that she's named the group "Greatm."

Glenn asks Maggie if they should take Eugene back to the church, but Maggie says that moving him could make him worse. Rosita tries to get Abraham to drink some water, but Abraham slaps it away. Abraham stands up to Rosita in a threatening way, but Maggie pulls a gun on Abraham and warns him to sit down or she will put him down. Abraham glares at Maggie, but he eventually sits down.

Dawn is talking to another officer about finding Noah, and the other officer says that they are wasting resources on the woman (Carol) that they just brought in. Beth objects saying that the officer charges his DVD every day even though they have limited resources. Dawn tells the other officer that he's right to turn off the machines, and that the woman will have to survive on her own to make it.

After the other officer leaves, Dawn tells Beth that she just killed that woman. Beth says that Dawn could tell him that she changed her mind, but Dawn says things are too fragile. Dawn gives Beth a key to the drug locker so that Beth can try to save the woman. Dawn says that she doesn't even trust Dr. Edwards with the key.

Back at the fire truck, Glenn, Tara, and Rosita take a bucket and head out into the woods to gather water. They pass by a couple walkers pinned under a downed telephone pole. Tara is talking about how they shouldn't be mad at Eugene for using the one skill that kept him living.

Maggie is looking at Eugene who is still lying unconscious in the roadway. Maggie goes and gets a ladder and blanket from the fire truck, and she uses them to build a tent around Eugene to shade him from the sun. Maggie tells Abraham to get over himself that he's not the only one that lost something today. Maggie says it's never going to get any better than this.

Beth goes to see Dr. Steven Edwards and asks him what medicine he would give the woman in room. Steven says that Dawn called it to let the patient die, but then he realizes Beth has the keys to the medicine cabinet. Steven asks Beth if she took the keys or if Dawn gave them to her. Steven says if Dawn gave it to her then she wasn't doing it to be nice. Steven tells Beth what medicine to use and wishes her good luck.

Glenn is gathering water from the stream. By the stream, Rosita recounts the story of how she met Abraham and Eugene. Abraham helped Rosita fend off some walkers, and he told her that he needed her help saving the world. Glenn notices some ripples in the water, and he says the ripples are fish.

Suddenly, another car pulls up and starts firing at them. Another officer rescues the first two officers. The car speeds away but Sasha shoots out one of the tires. Rick and his group follow the car on foot to find where it has stopped. There are a number of melted walkers on the ground around the car. They spot a couple of the officers running away, and Rick and the others chase after them.

However, Daryl sticks around and checks the car and a nearby trailer. Suddenly, the bald cop that rescued the other two officers jumps out. The bald cop and Daryl fight, and he pins Daryl on the ground, pushing him next to a walker.

Daryl grabs a walker's head by the eye sockets and uses it to club the bald cop. Before the fight can continue, Rick shows up and points a gun at the bald cop. Rick looks like he's about to shoot the cop, but Daryl says three is better than two to trade.

Rick's group is telling the three cops about their plan to trade them for some of their people at the hospital. The lady cop in the group says that their plan won't work because Dawn won't make the trade. Officer Lamson tells them that they can make it work, but they have to be able to talk to Dawn. Lamson says that his only interest is in peaceful resolution and not dying.

Michonne goes to see Father Gabriel. She tells him that she knows all this is new to him, but she wants him to know the things that they do are worth it. After Michonne leaves, Father Gabriel uses the machete he took to pry up the floorboards of the church.

Back at the hospital, Beth is walking and she hands some strawberries to an elderly man. He starts coughing like he can't breathe. While everyone is distracted, Beth sneaks into the drug locker and removes a vial. Beth takes the medicine to Carol's room and injects it into her IV. Beth talks to the unconscious Carol, telling her that she just wanted her to know that she was there.

Tyreese and Sasha are going through the trunk of a car. Sasha gets mad and throws a tire tool, and Tyreese says that she needs to be able to say goodbye. Sasha says that she should have been able to do it herself (referencing stabbing Bob after he died), but Tyreese say it was ok that she just let him help her. Sasha gives Tyreese a hug.

Back at the church, Father Gabriel goes down into the hole he has pried into the floor, and he crawls outside of the church. However, in the process, he steps on a nail, injuring his foot. Father Gabriel hobbles away into the woods.

Lamson is telling Rick that Dawn will tell him that she won't make a deal, that she won't compromise. However, he says that she will. Rick says thanks Sergeant Lamson, and the officer says his name is Bob. Rick says he's still a cop, but Lamson says the real cops are all gone.

Father Gabriel is out in the woods, when he hears something. He's attacked by a walker. He throws the walker down, and he grabs a rock. But as Father Gabriel is about to smash the walker's head in, he notices a cross around its neck.

Officer Lamson tells Sasha that one of the melted walkers in the parking lot was someone he knew named Tyler. He relays a story about how Dawn sent Tyler to drive the last group of survivors to safety, but obviously they didn't make it out alive. He says he's been out there the whole time like he's part of the street, and there's nothing he can do about it. Sasha offers to help take care of the situation. She asks Officer Lamson if he remembers where Tyler was. Officer Lamson says that he could take her right to him. Sasha says that she's not going out there, but that she's a good shot.

Back at the fire truck, Abraham is still kneeling on the ground. Maggie takes Abraham a bottle of water and puts it down next to him. Maggie asks Abraham if he wanted her to shoot him. Abraham says that he thought he did, but he didn't. Suddenly, they hear Eugene start to stir. Maggie goes to help Eugene, and Abraham picks up the bottle of water. As Glenn, Tara, and Rosita are walking back, Tara is playing with a yo-yo.

Sasha is leading Officer Lamson over to a window at the side of the building. Lamson tells Sasha where Tyler is outside. When Sasha leans toward the window to take her shot, Lamson pushes her forward into the window, which knocks her out. Then, Officer Lamson takes off running. The episode ends with a shot of an unconscious Sasha on the ground with blood dripping from her head.