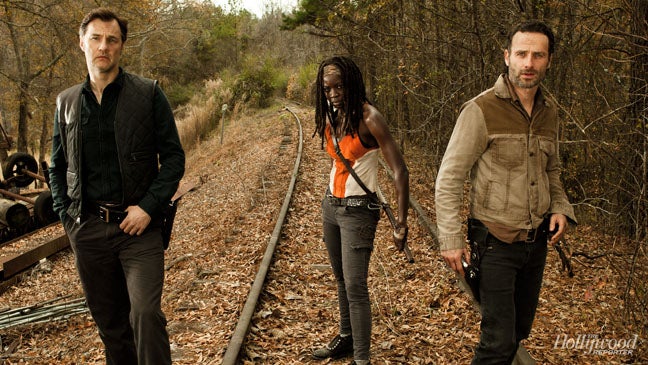 In a new interview, The Walking Dead creator and executive producer Robert Kirkman told Entertainment Weekly that the next three issues will give fans  "a resolution to the storyline" of Rick and his group's war with Woodbury and the Governor. ComicBook.com has noted in the past that the recurring motif of the show seems to be that they find a camp, they set up shop, and then it's compromised and they move on. Kirkman admitted to EW, "That would certainly appear to be settling into a cycle." He stopped short of saying that the Governor and Woodbury would not appear in season four, or that the season finale that star Andrew Lincoln has joked will have "about forty" deaths in it represents the final showdown that fans of the comics have been expecting this year, but he did promise closure. "I don't want to give anything away because we have some really cool stuff planned for the finale, but I will say that there is a resolution to the storyline at the end of the season, as people would expect," Kirkman said. "It becomes a whole complete story that you've been able to experience over the course of season 3. And It will set things up nicely for season 4. There are new places to go in season 4, but whether or not that means a new setting or new story direction or simply new characters I can't really nail down any specifics." Of course, fans familiar with the comics can probably come to a reasonable conclusion as to how they might drag out the Governor's story for another season. There was a point at which he certainly seemed beaten and possibly dead, from which the character rose back up to be an even greater threat.

The Walking Dead: Resolution to the Governor's Story This Season