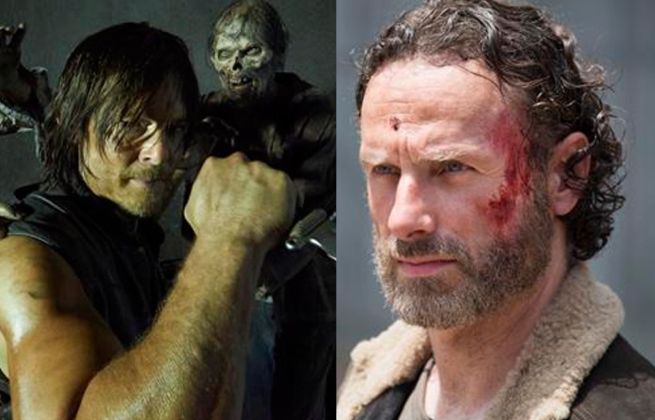 During recent public appearances promoting The Walking Dead, Andrew Lincoln's beard has been noticeable missing. Since The Walking Dead Season 5 is still filming, it means that sometime during Season 5 on the show, Rick Grimes will lose his beard (or Rick Grimes gets killed off freeing up Lincoln to make his own personal hair-grooming choices).

While Lincoln has remained tight-lipped in regards to the reason behind his beard-loss, Norman Reedus revealed where the missing beard now resides during a panel with Lincoln and Greg Nicotero at Walker Stalker Con on Saturday.

"You know what's crazy is I have his beard in a ziploc bag in my refrigerator," said Reedus. "True story."

Lincoln added, "This is for real. He said to me, and he just went, when we had to do this…are we allowed to talk about it?"

Nicotero chimed in, "You can't talk about that."

"Whatever happens…when I died from the show this season," joked Lincoln. "He says, 'I want Andy's DNA.'"

And why did Reedus want Andy's DNA? Reedus revealed that it was so he could grow another Andy.

So while we're pretty sure that Lincoln and Reedus were joking about the cloning, we wouldn't completely rule out the possibility of Rick Grimes dying and Daryl creating a clone from Rick's beard. Stranger things have happened on the show after all.