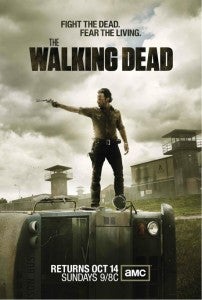 The Walking Dead Season 3 premiere is sure to offer up some shockers to get people talking. The big question is exactly how far will the show go. In recent interviews, producers and cast members have indicated that basically no one is safe. Could a major character get killed off in Walking Dead season 3? Here are six possible shockers that could happen on The Walking Dead season 3. 6. Carl Grimes Gets A Girlfriend – At the New York Comic Con, Chandler Riggs, who plays Carl Grimes, strongly hinted that there could be romance in his character's future. Chandler suggested that 13 year old Carl might have his eyes set on a older woman, 16 year old Beth Greene. 5. Rick Grimes Loses His Hand – In the comic book, Rick Grimes loses his hand. Even though Robert Kirkman has said that not everything that happens in the comic book will wind up happening on TV, it's still always a possibility. We actually doubt this one will happen, since Merle has already lost his hand, so it would be a real shock if it did. 4. The Governor's Niece Is Shown – In the comic books, The Governor had a niece named Penny, who was killed and returned as a zombie. The Governor kept Penny leashed up in his apartment. Producer Glenn Mazzara has hinted that key moments in regards to The Governor in comic books would be adapted to TV. 3. Lori Grimes Has Her Baby – From The Walking Dead season 3 previews, it looks like Lori Grimes is much further along in her pregnancy. It's probably a pretty good bet that at least one episode of season 3 will deal with Lori actually having her baby. Will it occur early in the season or will it be something saved for the finale? 2. Carl Grimes Becomes A Killing Machine – At New York Comic Con, Chandler Riggs and other cast members confirmed that viewers will be seeing a much different Carl Grimes this season. Previews for season 3 have also shows an armed Carl Grimes ready to gun down zombies. 1. A Major Character Dies – With The Walking Dead producers already claiming no one is safe, it's very likely that one or more major characters will die during the course of the series. Who will it be? Likely suspects would range from Lori Grimes to Glen.