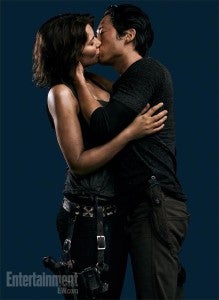 Over at Entertainment Weekly, they've got a photo shoot and a few words with actresses Lauren Cohan and Steven Yeun, who play Maggie Greene and Glenn Rhee, respectively, on AMC's The Walking Dead. According to the actors, the characters they play are starting out the season feeeling pretty good about their relationship and their place in the world of The Walking Dead--which probably makes sense, given that the premiere episode is titled "Thirty Days Without an Incident." "It's in a really safe place," said Cohan of the relationship. "They're in a good groove, living as close to what normal life should be," said Yeun. "Whatever you can call that in this world." More on this, almost certainly, to come at San Diego Comic Con International later this week.