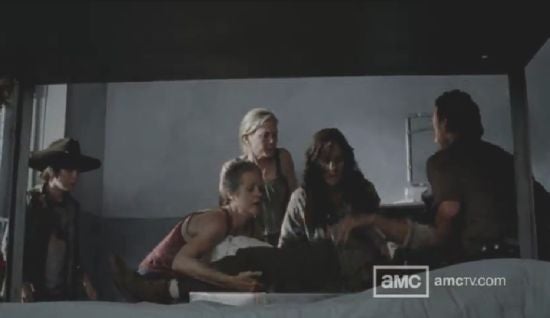 Last week, the season premiere of The Walking Dead was a rousing success by all accounts. Fans were happy because the premiere picked up the pace of the series, offering plenty of zombie-killing action. AMC was happy because to say the ratings were great would be the understatement of the year. The Walking Dead ratings were groundbreaking for cable, even beating network programming. This week's episode of The Walking Dead is entitled "Sick." According to the AMC description, "A life hangs in the balance; the group deals with a threat to their new surroundings." While that teaser might not reveal much, everyone knows that the life hanging in the balance is Hershel's. In the premiere episode, a zombie bit Hershel in the lower leg, and Rick amputated Hershel's leg in an effort to save him.  The new threat is likely the  prison inmates. In Walking Dead sneak preview teasers that were aired during The Talking Dead and Comic Book Men, Daryl Dixon was shown at odds with the newly discovered survivors from the prison. The "Sick" episode of The Walking Dead airs on AMC on Sunday, October 21 starting at 9:00 PM ET. Check out a little over a minute sneak preview of the episode below.