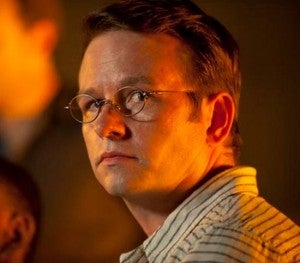 Be warned potential spoilers for The Walking Dead follow. With The Walking Dead being one of the few (if not the only) show on television where major characters regularly get killed off, what's an actor or actress to do if they get another opportunity? Do they pass on the other opportunity to stay on the top rated Walking Dead knowing they could be let go at any moment? Well, one particular cast member has landed a new job, which has led to a lot of speculation over if he will make it past season three of The Walking Dead. According to The Hollywood Reporter, Dallas Roberts, who plays Milton on The Walking Dead, has been cast in Unforgettable on CBS. Roberts will be playing a character named Eliot, who is described as a detective in charge of the major cases section of the NYPD. Since season four of The Walking Dead is set to start filming in May and Unforgettable returns to CBS in late July, it would seem to indicate that both series might be filming at the same time. Of course, given how not every character appears on every episode of The Walking Dead, it's always possible that Dallas Roberts could juggle two different series at once. However, when Dallas Roberts was quizzed last year over whether he signed a multi-year deal with the show, he seemed to indicate that he hadn't by pointing out that the show hadn't even been picked up for a fourth season at that point yet. It certainly isn't surprising that many are speculating that Milton's time of the series might soon be coming to an end.