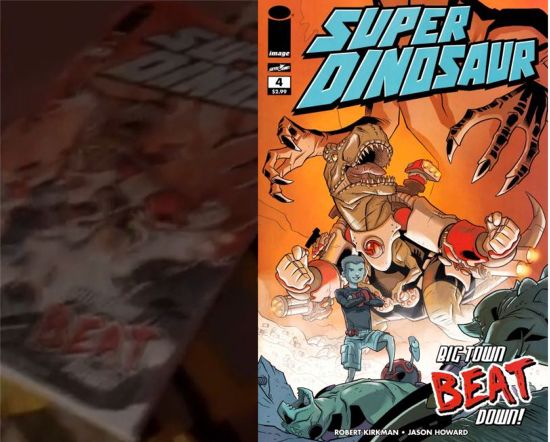 In what has got to be a first in television history, Robert Kirkman snuck in a plug for one of his comic books on the corpse of a dead kid on The Walking Dead. During the "Claimed" episode of The Walking Dead, Michonne discovered a room where four children, who had been killed, laid dead in two beds. When the camera panned in on two of the kids' bodies, there was a comic book laying on the chest of one of the kids. We're assuming the despondent parents wanted to leave some of the children's treasured items next to them. The comic book in question was a copy of Super Dinosaur #4, which was written by Robert Kirkman. In addition to being the creator of The Walking Dead, Robert Kirkman also co-created Super Dinosaur with artist Jason Howard. While it might be the first time that a comic book has been featured on a child's corpse on television, this is not the first time that one of Robert Kirkman's other creations has been featured on The Walking Dead. On The Walking Dead Season 4 Premiere, Michonne brought Carl back a stack of comic books, and a copy of Invincible #56 was the top comic on the stack. Of course, it might not be Kirkman himself who is getting the comics worked into the show. Showrunner Scott Gimple is said to be a huge fan of Kirkman's comics, so he might be slipping them in as a homage to The Walking Dead's creator.