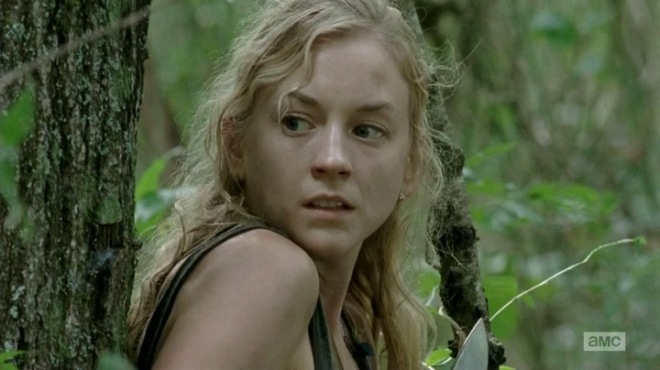 The Walking Dead's Beth is making up for lost time in the series' fifth season.

Speaking with The Hollywood Reporter, Beth's Emily Kinney discussed her character's evolution from a frightened teenager into a capable, and dangerous, adult. For those who missed last night's episode, The Walking Dead finally revealed where Hershel's younger daughter has been during her hiatus. While Rick and company battled there way to Terminus, Beth was held captive at a rather hostel hospital. While the hospital's doctors provided Beth food, shelter, and protection from the Walkers, she was forced to stay and aid them.

The rather grueling experience lit a fire inside Beth, Kinney revealed. Forced to survive the Hospital's demands, along with Walkers, without the aid of Rick's group, Beth has developed a fearlessness that will define her character moving forward.

"You really see Beth going from being a teenager to a powerful woman. It's awesome. I think that was there all along in Beth," Kinney told The Reporter. "She's very smart and aware, but it was just a matter of when she needed it to come out. She has always had that confidence."

Of course, Carol's recent arrival at the hospital may change some Beth's plans. Kinney said that her friend's presence might "snap her out" of the path she was heading on, and rethink her next move. Kinney remained mum on whether Beth will ever reunite with the rest of the group, only saying that she was as hopeful as fans were.

Beth and Carol's paths, now intertwined, will continue during next week's episode of The Walking Dead, "Self Help."