The next movie on Marvel Studios' release schedule is Guardians of the Galaxy Vol. 2. The movie will pick up in the aftermath of the misfit group uniting to take down Ronan the Accuser but, so far, we haven't known the time which has passed and exactly what the Ravagers have been up to.

In an interview with Kraglin (and Rocket Raccon) actor Sean Gunn at Heroes & Villains Fan Fest, ComicBook.com has learned what to expect from the early moments of Guardians of the Galaxy Vol. 2.

"When the movie starts, it's only a couple of months after the first movie," Gunn says. "The Ravagers have not gone hard after Peter Quill after he double crossed them with the Infinity Stone." 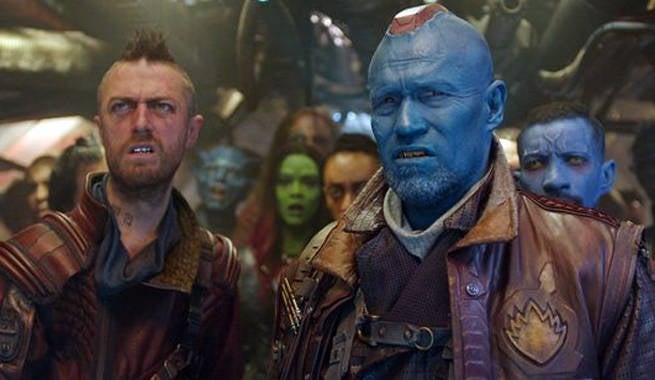 Based on the clip shown at San Diego Comic Con and poster showing him standing side by side with the Guardians, it looks like Yondu is showing a little favoritism towards the good guys. That doesn't sit well with his Ravagers.

"There's a little rumbling amongst the Ravagers, like, 'Where does Yondu's allegiance lay here? Is he going soft on Quill?'" Gunn said. "So, the Ravagers have to make a decision of what they're gonna do about Yondu and I think Kraglin is a key part of that."

Guardians of the Galaxy Vol. 2 builds on the massively successful and beloved elements of the original from from 2014. According to Gunn, it will both use some of what worked but also set itself apart with new original themes.

"I do think that it tries to touch some of the same notes that worked in the first movie," Gunn said. "It's a tentpole movie, meaning it's literally for everyone. It's not just a kids' movie disguised as an adult movie or vice versa. I really think it's for all ages. I really do think it has a heart but it's a comedy, as well.

"I've heard my brother [director James Gunn] say that the first movie was about creating a family the second movie is more about being a family and the struggle of maintaining that. I think that's spot on and I hope that's what resonates with people."

MORE GUARDIANS OF THE GALAXY VOL. 2

Dave Batista Comments On X-Men Vs. Avengers / James Gunn Says Drax Is The Funniest Character / Re-Shoots Have Begun / There Was No Back-Up Plan For Kurt Russell's Character

How Guardians Of The Galaxy Vol. 2 Starts Out According To Sean Gunn