The CW has released promotional images from "Are You Ready For Some Zombies?" the season four premiere of iZombie.

The series will return for on February 26th and from the looks of the photos Liv (Rose McIver) and Clive (Malcolm Goodwin) are working their latest case that might involve Liv being a Seahawks fan judging from her t-shirt, Ravi's (Rahul Kohli) zombie vaccine might not have worked out so well, and Blaine (David Anders) and Peyton (Aly Michalka) aren't having the friendliest of reunions. You can check out the photos in our gallery. 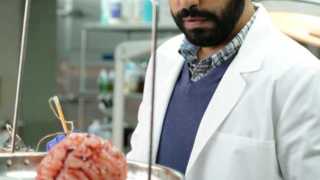 While the photos don't reveal a whole lot, the recently-released teaser trailer gives fans a little bit better glimpse of a Seattle under siege. Combined with Ravi's hungry eyes, might be a clue that things are going to be a little apocalyptic, something Kohli said came as a surprise.

"I always knew Rob Thomas's plans for the world; he had said to us for years, season 4 is where we get into more apocalyptic stuff, where the landscape changes," Kohli told ComicBook.com. "I always believed, we all firmly believed, that Clive and Ravi would remain human, untouched, and that's now a question mark on Ravi's status. That was a big surprise. I think Ravi and Clive are the audience; we're the humans and we live amongst the zombies, so the fact that that's in jeopardy, I was quite surprised."

As fans will remember, iZombie ended things on a pretty dramatic note during last year's season finale, when Seattle was officially established as the country's zombie haven. And according to the show's cast and crew, things will be in a sort of "new normal" when season four picks back up.

"We're going to pick up next season three months later, and the United States has walled off Seattle like it's West Berlin," showrunner Rob Thomas teased to ComicBook.com after the season finale. "Chase is hanging on by a very thin thread; it's like every day is the Cuban missile crisis. Brains are coming in, but they aren't getting as many as they expected, and zombies are hungry. In fact, the opening sequence in season four is going to follow a brain from the moment a man dies somewhere in Texas to the moment it reaches the brain tube and is ingested by a Seattle zombie. In fact, it's even going to start earlier than that. We're going to see a commercial on TV; we want to get someone like Laura Linney making a commercial pleading for the people of the United States to sign their brain donor card."

iZombie will return on Monday, February 26th at 9 p.m. ET/PT on The CW, following a new episode of DC's Legends of Tomorrow, which will be sort of sharing a timeslot with Supergirl for the remainder of the season.

'iZombie': "Are You Ready For Some Zombies?" Photos Released