Archie Comics has provided ComicBook.com with an exclusive preview of next week's Riverdale Comics Digest #6.

The issue features stories set in the world of Riverdale, as well as both classic Archie Comics and tales from the rebooted "New Riverdale" continuity launched in 2015.

Riverdale Comics Digest #6 is Betty-centric, telling tales that center on Betty and her relationships with Archie and Veronica, including one from the Riverdale Prequel One-Shot that dealt with what happened the weekend of July 4, before and during the time when the community began to grapple with the death of Jason Blossom.

Going back that far for Betty's story might seem odd -- after all, it totally undercuts the advancements she has made on the show as well as her focus on a romance with Jughead Jones rather than Archie Andrews. So why do it?

Well, the story from the prequel comic centered on Betty's relationship with her sister and her mother -- something that will be particularly relevant in the next couple of weeks, as Riverdale not only returns to the airwaves but introduces audiences to Chic Cooper, the son Alice gave up for adoption when she was a teenager. 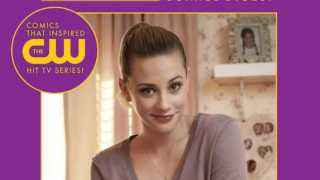 Chic's existence was hinted at last season, when Alice Cooper admitted to Betty that one of her life's great regrets was that she allowed her husband to pressure her into giving up her baby when she became pregnant the first time. The revelation helped to explain a lot of Alice's behavior toward (also pregnant) Polly, and has informed their interactions since.

Archie's digest-sized comics are available at bookstores, supermarkets, and toy stores everywhere (and occasionally in the direct market, depending on your local comic shop).

The format has been in use for decades but has had a resurgence in popularity as publishers struggle to get a foothold with mainstream audiences outside of comic shops. Marvel Comics recently started reprinting some of their classic and modern material in digest-sized issues through Archie's distribution network.

You can check out the preview in the attached image gallery.

You can see the official synopsis for the issue below.

See how everything led to the CW's Riverdale TV show with this digest-sized collection featuring stories from our relaunched titles as well as classic Archie stories!

Pokemon Synopsis Sets Up Ash's Most Emotional Reunion Yet