The fantasy world has a weird place within our current pop culture. Sure, the essence of fantasy can be felt throughout different genres, but a lot of the attempts to go all in -- to create a world and a mythos that is wholly unique -- have varied levels of success. The latest entry to that is Isola #1, an issue in a new series that simultaneously homages its sources of inspiration while quietly paving its own ground.

From the very first panel, Isola #1 transports readers into its fantasy space. At the center of it all is Captain Rook, a young woman whose mission begins to take shape as the issue goes on. Rook is guarding Olwyn, the queen of the land of Maar, who has been turned into a black-and-turquoise-hued tiger by an evil spell. Rook decides to escort Olwyn to Isola, a mythical land that can supposedly reverse the curse.

In a way, that description alone is more than what the issue tells you outright, with a lot to be inferred from single lines or between actions. There's no episodic crawl at the beginning, no monologue -- just a story that grows and evolves into something beautiful and dynamic the more you look at it.

That narrative choice - of dropping readers into what would maybe be the beginning of a normal "Hero's Journey" -- might be seen as risky by some, but the end result is pretty effective. The ambiguity of certain things, and the pages at a time with little-to-no dialogue, gives every panel so much more weight, and puts every action or facial expression in a new light. In a way, the issue almost begs a second read-through based on Olwyn alone, with her actions and position in the space taking on a whole new light once you know her circumstances.

But a lot of the issue's weight falls on Rook, a character who seems both willing and unwilling for that challenge. Rook doesn't feel like your traditional fantasy protagonist, one with character beats that kind of feel at war with each other in a dynamic way. Does she believe she's capable of carrying out this quest? Does she believe that Isola even exists? And how exactly does she feel about Queen Olwyn? The answers to those questions, and the room in which those answers could grow, show a lot of promise.

What also shows promise, and really helps bring Isola #1 to such cinematic, compelling heights, is Karl Kerschl's art. The panels definitely evoke different existing pieces of work, feeling like a blend of Miyazaki films and manga, and more Western examples like Disney's Renaissance and The Legend of Korra. But that all comes together in a unique way, to where every inch of every panel feels put to use.

Msassyk's colors are like the icing on the cake to Kerschl's art, filling the world in with simply breathtaking hues of green, blue, and orange. And the use of text in this issue is worth noting on multiple levels - Aditya Bidikar's lettering in the text is delightfully dynamic, shifting from conveying one emotion to another through dialogue almost effortlessly. But the sort of diegetic sounds of the issue are a really unique and effective creative choice, with words and sounds essentially being etched into the panels. 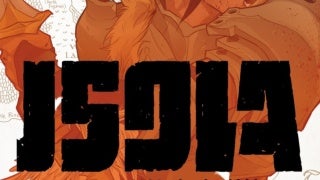 Isola #1 might not be the flashiest comic debut in recent months, but that's part of the beauty of it. What it does provide is equal parts understated and profound, in a world that readers will hopefully be eager to visit again. While there's no telling exactly where the story is headed, readers will hopefully follow the lead of Rook and Olwyn, and hold faith in whatever comes next.

Review: 'Isola' #1 is a Heartfelt Start to a Beautiful Fantasy Epic

Another WWE Faction Wants to Step Up and Challenge The Bloodline