Battles can take their toll on an army, but Renny isn't letting one botched fight affect the bigger plan, and he's going to need Robot Paul to do his part to pull it off.

Renny's plan took a bit of a hit last issue, but as we see in this exclusive preview of AfterShock's PATIENCE! CONVICTION! REVENGE! #5, that isn't going to stop him from completing his mission. Thing is, he's going to need his undercover spy to make some things happen, and Robot Paul isn't feeling so great about the sped up schedule.

The plan was already kind of tight begin with, but now it's even tighter, and to boot, their enemies now have a hostage they have to rescue too. So yeah, things have been better, but we're betting they can still pull out the win.

You can check out the full preview in the gallery.

"Old friends better run, because Operation PATIENCE! CONVICTION! REVENGE! is underway. Everything goes wrong at once. The plan is falling apart. Renny's nemesis has anticipated his every move. Any sane person would admit it's over. But Renny didn't spend years in the desert building murderbots to settle for “sane.” 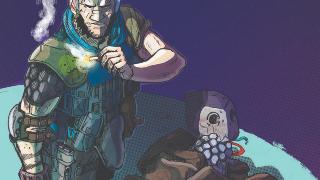 If you aren't familiar with PATIENCE! CONVICTION! REVENGE!, you can find the description of the series' first issue below.

"Disregarded, disrespected and dismissed, Renny has a chip on his shoulder.

Once an equal partner in a criminal syndicate that rules Las Vegas, he now finds himself living in a shack in the desert. But the shack has a workshop, and Renny's been busy. It’s time to march his robot army into the neon hell of a cyberpunk Vegas and retake his seat at the table. Or take the wood from the table and build enough caskets for the whole syndicate.

Like an Elmore Leonard novel set in the world of Blade Runner, PATIENCE! CONVICTION! REVENGE! is offbeat and often funny, but all about the dark corners of cities and minds. A violent criminal genius with a bad case of monomania makes for the most fun you'll have with a comic this year."

Watch: Shaq Gets Knocked Out by Cody Rhodes in AEW Dynamite Debut

Xbox Game Pass Is Losing One of Its Best Games