DC Collectibles' Artist Alley statue line is getting even better with some brand new variants, and we've got your exclusive first look.

The Artist Alley line is based on the convention staple of the same name, bringing in fan favorite artists to give their unique spin to DC's iconic characters. The first releases include lines from Christopher Uminga, Hainanu "Nooligan" Saulque, and Sho Murase, and now DC Collectibles is revealing special black and white and holiday variants of these three impressive lines.

As you can see in the gallery, the Christopher Uminga line features Batman, Wonder Woman, and Superman in Uminga's unique style, and there will also be a black and white variant of the line numbered between 1 - 500. These look amazing in color, but that Batman might even look better in black and white. 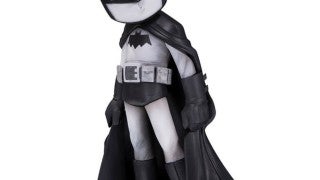 Now, Sho Murase's core line of Artist Alley vinyl figures is already based in a black, white, and red motif (which are gorgeous by the way), so it wouldn't make sense to just make less colorful versions. Instead, Catwoman, Poison Ivy, and Harley Quinn each get holiday variants, and while they're all great, Poison Ivy and Harley Quinn, in particular, stand out.

There will be plenty of amazing choices to pick from, and executive creative director of DC Collectibles Jim Fletcher is pretty excited about the Artist Alley line so far.

"The feedback for our upcoming DC Artists Alley line has been fantastic," noted Fletcher. "The first few Chris Uminga figures have already sold out at the retailer level, and we can't wait for them to hit stores this summer. We hope fans embrace the different variant editions for each artist and collect them all!"

Each of these new variant figures will be available for $40.00, and you can pick up the Uminga wave starting in June. The Nooligan wave lands in September, while the Murase wave hits comic shops in November. You can get a look at all of the figures in the gallery.