Warner Bros. and DC Films released a new photo from the upcoming Justice League movie on Tuesday morning. There was little context surrounding it but having visited the set, Comicbook.com can flesh out some details of the scene.

Be warned: spoilers for a couple of scenes from Justice League follow.

Batman, The Flash, and Wonder Woman are in a Gotham ventilation tower in this photo. It was a massive set built for an action scene. The group gets word of a parademon nest after a conversation with Commissioner Gordon and set out in Batman's new four-legged Crawler vehicle (a formidable spider-like tank which can crawl up walls). 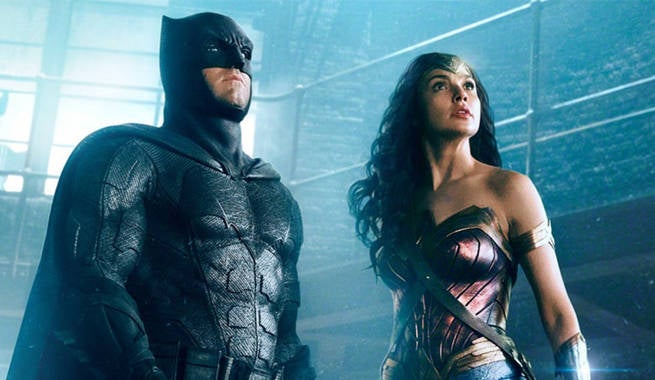 Digging their way through a tunnel to the ventilation shaft on (or near) Stryker's Island, Batman's Crawler uses various weapons to fend off ravenous parademons trying to attack them. Once inside, they find a massive horde of the creatures and fight their way out, including a sequence on a long and broken bridge outside of the shaft.

Eventually, the Crawler ends up buried in water as the ventilation shaft presumably ends up flooded. Cue: Aquaman's entrance? It sure does look like someone made a surprising entrance by tossing Wonder Woman's shield down there! In any case, concept art showed the three heroes standing on top of the Crawler as it became consumed by water.

In Justice League, fueled by his restored faith in humanity and inspired by Superman's selfless act, Bruce Wayne enlists the help of his newfound ally, Diana Prince, to face an even greater enemy. Together, Batman and Wonder Woman work quickly to find and recruit a team of metahumans to stand against this newly awakened threat. But despite the formation of this unprecedented league of heroes—Batman, Wonder Woman, Aquaman, Cyborg and The Flash—it may already be too late to save the planet from an assault of catastrophic proportions.