In typical Bendis fashion, The Man of Steel #2 is incredibly decompressed storytelling -- so much so that it becomes dull, and even beautiful art by Doc Shaner, Steve Rude, and Jason Fabok cannot really elevate it.

The all-star creative team does manage to create some genuine "Hell-yeah" moments throughout, including a charming bit of business with Toyman and some phenomenal character work by Bendis along the way. Ultimately, though, the rest of the issue is so mediocre that fleeting moments of greatness can only do so much.

Clark Kent seems to be veering back toward pre-Crisis on Infinite Earths levels of aloofness and unfashionability in his wardrobe, but at least he has stopped being an ancillary figure in The Man of Steel. Villain Rogol Zaar still appears to be Bendis's primary interest, but Superman gets more, and more interesting, things to do in #2 than he did in the disappointing debut issue.

Perry White is the standout character of this issue; it is clear Bendis really gets what makes the grizzled old newsman tick. Perry gets some great character moments, inspiring the younger writers and pouring his heart out to Clark. 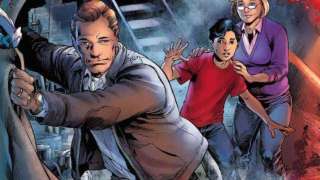 The newsroom as a whole begins to be stacked against Kent, though, and it seems likely that will spill over into some sour relationships when The Man of Steel is over and Bendis is writing monthly Superman comics. One of Bendis's new characters, Robinson Goode, seems to be very interested in what's going on with Lois, and it tips her from "interesting" to "suspicious" in a big way, cementing that the newsroom stuff is, on the whole, better-executed and more intriguing than the superheroics so far.

And all throughout that, there are future stories teased, seeds planted, and at least one line that we hope was a joke -- because it alludes to one of the most overused tropes in all of Superman storytelling -- and one that was already utilized at the end of the New 52 and the start of Rebirth just two years ago.

The story opens shortly after the destruction of Krypton, and Bendis would like us to believe that whatever drove Rogol Zaar to contribute to its destruction is as compelling a mystery as the disappearance of Superman's family in the present day. Bendis, in this instance, is very wrong, and the already-slow pace of the story stops dead in its tracks for four pages while Appa Ali Apsa debates the ethics of Kryptonian genocide with Lord Gandelo, another member of The Circle. Expect him to be another casualty to show us how ruthless and awesome Zaar is by the time all of this is over.

The Steve Rude material is chock full of Kirby-inspired character designs that would have felt at home during Jerry Ordway or Karl Kesel's runs on the Superman titles. The sense of fun and the off-the-cuff structure of that sequence fills the book with an energy it otherwise lacks, but both the fun and the logic halt when Rogol Zaar steps in and is infuriated by the discovery that a Kryptonian still exists somewhere in the universe. Explaining the faults in the scene would spoil aspects of it, but suffice it to say, his motivation makes next to no sense and his character design is all over the map, with his gruesome look not really suited to the clean lines of Rude's pages.

Ultimately this is a serviceable book with a boring Superman, a non-existent Lois and Jon, and a villain who the creative team loves more than the audience likely will.

It also suffers relative to DC's other current and recent "event" stories: Two issues in, it was hard not to be blown away by Doomsday Clock, sucked in by Metal, and intrigued by No Justice. Two issues into The Man of Steel, it feels like time for Bendis to get on with it already.

'The Man of Steel' #2 Is Slow, Dull Storytelling Punctuated by Moments of Joy

Arrow: The Complete Series Is Now Less Than $100 on Blu-ray and DVD