In January, Crisis on Infinite Earths writer Marv Wolfman will be featured in an oversized Superman one-shot -- with a story he penned more than a decade ago.

Better still, Wolfman counts the story among one of the best things he has ever written.

"Man and Superman," featuring art by DC vs. Marvel artist Claudio Castellini, will be featured in the upcoming Superman 100-Page Super Spectacular, presumably something DC decided to make after the success of their 100-Page Giants at Walmart in recent months.

The tale was originally created for the acclaimed anthology series Superman Confidential, but did not make it to print before that series was cancelled. 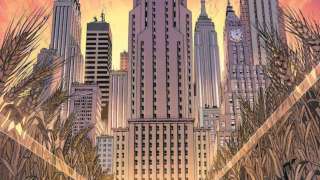 , the book we wrote and drew it for, was about finding some period in Superman's past and to explore it in ways we'd never seen before," Wolfman explained on Facebook. "This story takes place during the weeks after he leaves Smallville and comes to Metropolis for the very first time. Clark not only is in search of a job, but he's trying to figure out if he ever wants to become Superman. He aware that the moment he puts on his uniform his entire life and everything he's known before, is about to abruptly change. Forever."

Wolfman is encouraging fans to contact their retailers to pre-order the one-shot, which hits in January. One-shots and miniseries are typically hard sells for direct market comic shops, but a 100-page issue is likely to carry a hefty price tag, and/or be chock full of reprint material, which makes preorders key to getting a decent number of the thing in stores.

In the case of Superman 100-Page Super Spectacular, Wolfman's four-part, unpublished story will be published in its entirety and may fill the whole book.

"Back in 2006 I wanted to write the story in a style that was very different from what readers expected from me. I also wanted to come up with several brand-new Superman ideas in each issue that we'd never seen before," Wolfman wrote. "When I was finished writing chapter one I knew (believed?) I had succeeded. Maybe beyond what I was hoping for. And though I may be deluding myself, I truly think the story kept getting better and better."

Wolfman was, along with John Byrne and Jerry Ordway, one of the architects of Superman's controversial post-Crisis on Infinite Earths reinvention in the late '80s. Some of the characters and concepts introduced during Wolfman's time on The Adventures of Superman have survived until the present day, with his mostly-forgotten villain Skyhook even being brought back during a recent arc in Supergirl.

Superman 100-Page Super Spectacular #1 by Marv Wolfman and Claudio Castellini will be available in stores and (probably) online on January 30, 2019. You can see some preview images in the attached gallery.