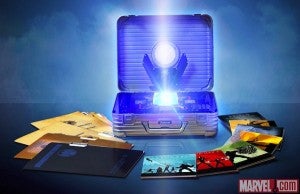 A German luggage manufacturer whose products have been featured in Marvel Studios films in the past is suing the studio and Disney's Buena Vista Entertainment over claims that they've damaged the company's trademark by creating a replica of Samuel L. Jackson's briefcase from the movie as an unauthorized piece of de facto merchandise used to house the upcoming Avengers Blu-Ray box set. Rimowa GmbH is claiming that their Topas attaché case, used by Nick Fury in the movie to store dossiers on the members of The Avengers, was reproduced outside of the terms of their agreement of the studio. They're suing for trademark infringement, trademark dilution, unfair competition, and claiming that Marvel acted outside of not just their agreement but the law. Rimowa GmbH want a jury trial and are hoping for all profits from allegedly unlawful conduct, and an award of three times plaintiff's actual damages to be proven, as well as an order preventing Marvel from "further infringement." "Marvel did not obtain any license or authorization from Rimowa to make replica copies of the cases for any purpose," says the plaintiff in the lawsuit. They add that "Images of the replica briefcase on Marvel's advertising materials, and fan video from Marvel's product display at this year's Comic-Con convention, show the plastic 'replica case' to be a close copy of Rimowa's Topas attaché case in every respect but quality -- from the proportions and coloring, to the style of the handle and latches, and, of course, in the use of the trademarked parallel ridges around the body of the case." Even if Marvel were to change the packaging on the box set, which contains Blu-Ray copies of not only The Avengers but all of their "Phase One" movies that led up to it, they would likely still face a lawsuit for trademark dilution, as the offending packaging was already displayed at San Diego Comic-Con International.