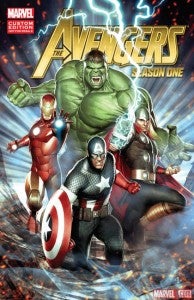 When Marvel first announced their Season One line of graphic novels, most fans were a bit baffled by the lack of an Avengers Season One book. When it didn't come even in their second wave of announcements, despite the movie fast approaching by that point, it seemed likely Marvel had special plans for the project... ...and they did. Included exclusively with the four-disc Blu-ray/DVD combo pack of Marvel's The Avengers sold at Wal-Mart stores, Avengers Season One was a 100-page paperback graphic novel written by industry superstar Peter David and announced just a month before its release date (take that, Superman Earth One Volume 2!). It also, because of the phenomenal success of the film on Blu-ray and the high profile of being released through a retailer the size of Wal-Mart, may have been last month's most-bought original graphic novel. So how did it fare? Not bad, actually, although it's pretty run-of-the-mill and the four different art teams (Andrea DiVito, Jon Buran, Nigel Raynor, Mike Bowden and Walden Wong) gave the book a somewhat uneven feel. The story, which follows The Avengers on their second battle against Loki (the first being the one after which Captain America was found frozen), modernizes the origin somewhat, giving Tony Stark a definite "Batman in Infinite Crisis" feel as he uses his computers to run simulations that allow him to study the weaknesses of his teammates (in this case, The Hulk, which also kind of ties into the more current interpretations of Tony-as-Illuminati). The book also treads a lot of the same ground as the movie, with the team never really congealing until the third act and a lot of hero-on-hero fighting--but the characters are well-explored, and the central dynamic of the story is, in a lot of ways, the dichotomy of Captain America, who is unconditionally loved and trusted by the public, and The Hulk, who can't seem to shake being a big green monster, no matter what he does. The one area where it may have been stretched a little thin, and the most notable spot that didn't completely work besides some of the art seeming rushed, is the fact that David introduces and uses a handful of villains. We get essentially one for each hero--without actually doing a lot of character development for any of them, giving the sense that he needed to create a "universe" in 100 pages. All of that said, it's a well-done book, and you can hardly fault David for aiming high. Better to be ambitious and miss than to aim low and hit the bull's eye. The best part of the whole thing? We got to see Peter David write the gray Hulk. How's that not awesome?