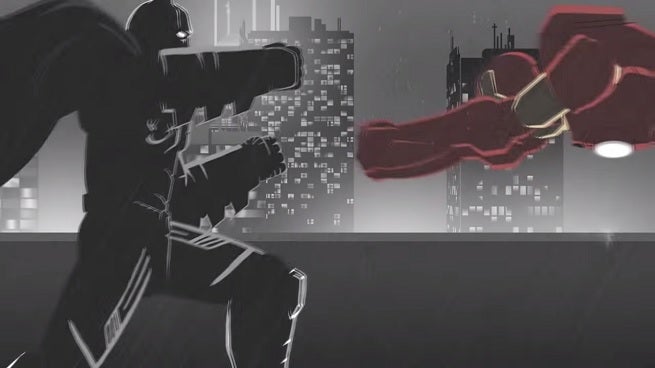 In an apparent homage to the Comic Con footage from Batman V Superman: Dawn of Justice, YouTube user Free Will Revolution has posted an animation pitting Batman against Iron Man.

Or, rather, the armored Batman from the movie -- or from The Dark Knight Returns.

It's an interesting idea, since of course Captain America: Civil War will follow Batman V Superman into the "heroes punching heroes" subgenre of superhero films.

It's "to be continued," so don't expect anything but lots of yelling fanboys in the comments. But it's probably worth a look...

Since the chances we'll see this fight even in an animated feature seems to be very low, since Marvel and DC are direct competitors, I thought "why not?"

UPDATED 11/16/14 12:31 a.m. ET - And, yes. the release dates on the movies were transposed, causing a minor error in one paragraph above that did not substantively change the overall message of the sentence, and brought the yelling fanboys from YouTube to here.