A recent installment of X-Men Black focused on Emma Frost and provided a number of noteworthy lessons. In addition to showcasing Leah Williams as one of the best emerging writers in superhero comics, it also served as a reminder to Emma Frost's unique position both within X-Men comics and the entire Marvel Comics publishing line. In the issue she tears through a number of challenges, deploying her potent telepathic and telekinetic abilities in a variety of creative fashions. Even in the face of incredibly powerful mutants like Sebastian Shaw, Emma Frost remains a force to be reckoned with, and in X-Men Black it is clear that no one, hero or villain, should underestimate what she is capable of accomplishing.

For most of her existence, Emma Frost has been defined in a team setting. Whether she served as a recurring antagonist, a member of an ongoing team of mutants, or a key figure in an event, Frost has regularly functioned as part of an ensemble cast of characters. She has flourished in this role, evolving in surprising ways and becoming a key figure in X-Men lore. However, her powerful place within Marvel Comics suggests that she may be capable of playing far more than a supporting role or sharing titles with an expansive team. Emma Frost is both one of the leading mutants and anti-heroes in all of Marvel Comics, and she needs a series entirely of her own again.

A Central Figure in X-Lore

Emma Frost began her story as a supporting villain in the midst of "The Dark Phoenix Saga." She was one of many in the Hellfire Club and played second fiddle to their leader Sebastian Shaw and the key role of Mastermind as he manipulated Jean Grey. In the wake of their disastrous encounter with the X-Men, Frost emerged as the villain with the greatest potential. She played a key role as the leader of the Hellions and an alternative Xavier's school, regularly courting members of the New Mutants. Her place within the stories of the X-Men have only grown since. New Mutants exposed Emma Frost as an anti-hero, not a pure villain, and she eventually came to play a leading role in beloved runs like those of Grant Morrison in New X-Men and Joss Whedon in Astonishing X-Men. Reflecting on the past several decades of X-Men comics, Emma Frost is one of the most important characters.

More significant is how Emma Frost has also been one of the most versatile characters within the X-Men line. Many of those who came before her have filled a similar role throughout the decades. Storm and Cyclops have undergone many changes, but give or take a suicidal revolutionary turn, they are generally recognizable across the years. Even someone like Angel, who has become an apocalyptic figure of death, has been stuck in a recognizable cycle since the most notable design and story changes were made during the late 1980s. Emma Frost, emerging from her place as a villain, has been allowed to grow and change in ways that none of her heroic counterparts have been. Her story is as rich as that of any other X-Men and still holds as much potential as any other leading figure in the team's long history. 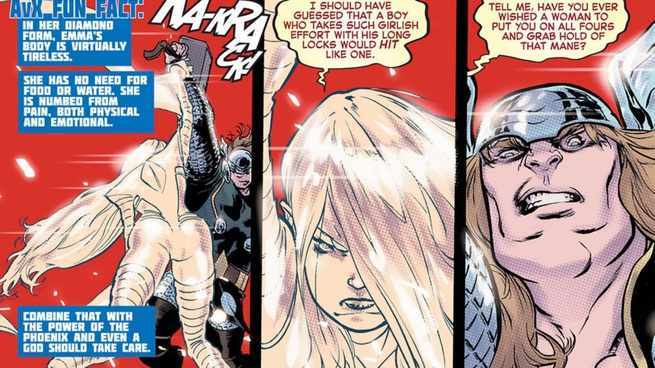 While Emma Frost's history is inextricably linked to the story of the X-Men and the rest of Marvel Comics' many mutants, she is also a character capable of thriving beyond the context of mutants. In her origins as a member of the Hellfire Club, she looked to leverage her abilities and status in order to gain more power in the world at large. While that group is primarily defined as antagonists for the X-Men, their roots extend to many spheres of influence and wealth with ties to almost all of Marvel's richest families. Frost's aspirations have always been far wider than her genetic heritage. She will never cease to be an important leader in the fight for mutant rights, but this battle does not define her entire life.

In addition to a vision that goes beyond the future of the X-Men, Emma Frost also has the abilities and smarts to allow her to be an important player in any corner of the Marvel universe. During the AvX event it became clear that Frost could go toe-to-toe with just about any Avenger, even before she got her hands on the Phoenix Force. Her secondary mutation that allows for her to transmute into a diamond form means she can exchange punches with Thor in addition to warping his mind. It may not be likely, but Emma Frost packs enough of a punch to make her a potentially valuable member of the Avengers, Guardians of the Galaxy, or any other top team. In the meanwhile, she has the connections and power to battle alongside (or with) just about any Marvel character.

One of the Most Complex Heroes at Marvel

Even when you set aside Emma Frost's extensive history and her impressive powerset, she's still a Marvel character in desperate need of a solo series. That's because she's one of the most complex and interesting characters at the publisher today. Even in her earliest days as a villainous member of the Hellfire Club and leader of the Hellions, her motives were far more complicated than world domination. She is someone who has understood the multi-faceted nature of power and how it is essential in defining one's place in the world. Every action she takes, even the misguided ones, stems from relatable fears and concerns and a heart that's far greater than her early appearances revealed.

Emma Frost has always been a character looking to make an impact and she has across the past 30 years of X-Men comics. No matter which sort of role she has played within that team's many configurations, she has always been big enough to push them in new and surprising directions. Over that time she has emerged as one of Marvel's most interesting characters and someone with a devoted readership. It's time to let Emma Frost shine on her own again, as she's a diamond without peer among the X-Men.