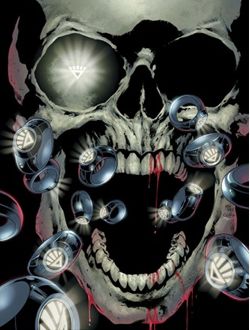 Total Blackout After giving us a taste of bad things to come in a Free Comic Book Day issue, Green Lantern and its tie-ins will launch the highly anticipated Blackest Night storyline, the follow-up to the smash Sinestro Corps. It's safe to say that this will be the epic DC event of the year, as the story will cross over into the worlds of heroes such as Superman, Batman and the Teen Titans. Promising visits from recently and long-deceased members of the DCU, Blackest Night is expected to pack quite an emotional punch on members of an already-shaken hero community.

- Now that former Robin Dick Grayson has fastened his cape and cowl, expect the pages of Batman to be full of new stories and turns as the former Nightwing adjusts to his role as Gotham's savior. Batwoman also flies solo this summer, taking over Detective Comics in late June. Need more Batman in your life? Not to worry, as several limited and ongoing series focusing on the belfry dwellers kicks off, Gotham Sirens, Batman and Robin, and Batman: Streets of Gotham just to name a few! Batgirl #1 also launches mid-summer! There will be no shortage of appearances from all members of the Bat-Family for the next few months!

- An all new Justice League led by Green Arrow and Green Lantern (Hal Jordan) takes flight with a six-issue limited series in early July, putting characters who have never shared a page , let alone a team, together, in some cases for the first time! Coming a few weeks before that is the limited series JSA Vs. Kobra: Engines of Faith. Can the JSA defeat a newly emergent and powerful Kobra? In other "Justice" related news, look for the return of several characters in Justice League of America and JSA, namely the Royal Flush Gang and Doctor Fate!

Whatever Happened to the Man of Steel

- He's right here! You didn't think DC would let summer go by without getting Superman in on the action did you? Superman: World of New Krypton hits its midpoint over the summer months, with issue six kicking off the four-part series Codename: Patriot. Other Kryptonian-adjacent action happens, with the re-launch of Adventure Comics, starring none other than Conner Kent himself, Superboy! The Superman titles are certainly ramping up over the summer heat!

J. Michael Straczynski brings his storytelling to the DCU this summer with a series of four separate books, each featuring a different hero from the Golden or Silver Age. The Red Circle will update these long-forgotten heroes of Archie and MLJ comics, with Straczynski giving each a distinct retelling of their origin in a modern context. Distinguishing the series even more is the fact that each book will have its own artist, adding some diversity to the look of each character. Expect this book, appearing throughout the month of August, to help DC ease into the fall lineup!

Don't worry folks, previews from Dark Horse, Image and other publishers are on the way! Stay tuned and watchful!