Before getting a proper Marvel Cinematic Universe introduction in Avengers: Age of Ultron (2015), the super-powered Sokovian twins, Wanda Maximoff/Scarlet Witch (Elizabeth Olsen) and Pietro Maximoff/Quicksilver, (Aaron Taylor-Johnson), debuted during the Captain America: The Winter Soldier (2014) mid-credits scene. Though we only got a brief glimpse of them in Baron Wolfgang von Strucker's (Thomas Kretschmann) secret underground lab, it did provide us with our first look at Pietro moving at super-human speed and Wanda controlling and rearranging matter.

To help visualize their superpowers for both Captain America: The Winter Soldier and Avengers: Age of Ultron, Marvel Studios turned to Trixter Film, an internationally acclaimed visual effects studio. Conceptual artist Paolo Giandoso was a key member of Trixter's art department at the time and dove deep into that challenge. He's released a collection of his Scarlet Witch and Quicksilver concept art and was kind enough to take part in an interview with us.

When did you begin working on designs for Scarlet Witch and Quicksilver?

Paolo Giandoso: I started working on the twins during the production of the tag sequence of Captain America: The Winter Soldier, when we first get a glimpse of their powers. Most of my work was focused on the development of Scarlet Witch's power, but I also had the chance to do some exploration work on Pietro's trail.

How did you approach their powers?

Paolo Giandoso: At the time, I was working in Trixter Film's art department. We approached the task of Wanda and Pietro's power as a team, making research and looking for references all together. Detailed reference boards were prepared and presented to VFX supervisor Christopher Townsend, and in turn, he showed them to the director. We needed to understand what the twins potential was and what they could practically achieve. It was a very important step as it allowed us to clarify what Joss Whedon wanted and did not want to see even before starting to draw.

What did you need to show?

Paolo Giandoso: Pietro and Wanda needed to have an effect that showed when their powers were active, and since they are twins there needed to be some sort of subtle connection between them. Their skills are radically different. He is a speedster. She, as they say in the movie, is "weird." So their link was meant to be visual more than conceptual. Therefore, we opted for a colored light "emission pattern" for both of them. Quicksilver would leave a silvery one behind him whenever moving at super-speed and Scarlet Witch have a red one eminate from her hands when altering reality.

What was Joss Whedon's input on the emission pattern?

Paolo Giandoso: It was important for Joss that this light emission would not appear smoky or whispy in any way. It was something otherworldly (especially Wanda's) more than a real fluid existing in the conventional space, and it should not behave in a conventional way.

Did you use any visual references for Pietro's speed?

Paolo Giandoso: For Pietro I remember we looked at a lot of images of motion blurs, opalescent objects and transparent films, like the effect of a thin oil layer on water and the distortion of light on the surface of soap bubbles. We also studied the effects that a hypothetical super speedster would have on the environment, such as how much damage would it cause by simply running at the speed of sound down an alley.

How about for Wanda?

Paolo Giandoso: Regarding Wanda, I divided her powers in two categories of "hexes:" matter alteration and mind warping. For her matter powers, research was done on the way objects decay in time and disintegrate accordingly to their base material properties. I thought influenced objects would start levitating around her while being affected by the red light (like Ultron's heart does at the end of Avengers: Age of Ultron). I also experimented with how the red light pattern would flow from her body — from her head, from her eyes, and from her hands — and how close to stay to the spherical shape her red magic displays in the comics. VFX supervisor Townsend's direction was to make the effect appear more tri-dimensional, so we opted for a less regular and more tendril-like shape, but we kept a hint of a starry geometrical pattern in certain specific moments.

What about her mind-control abilities?

Paolo Giandoso: When it was time to investigate the way Wanda "touches" the mind of people, it was quite interesting to understand how much the effect would be apparent. After all, since it was a more stealthy use of her abilities, it could not be as flashy as when she disintegrates things. At the beginning, I imagined that her mind powers would not be visible to normal human eyes, but that they would appear as tendrils of bright red light to people who can perceive magic and higher forms of energy (like Thor, Vision and the audience in the cinema). The only hint of a compulsion would be her and her victims eyes flashing red. This is the idea I illustrated in the picture of Wanda in the church: the soldiers can not really understand what truly happens, but the audience can. Since there was not time in the movie to establish such a complex concept, the perceptibility point was not directly stated to facilitate immediate comprehension. Nevertheless a visually similar effect can be seen when Wanda compels the Sokovians out of their homes to safety before the movie's final battle.

Do you recall anything special about when she tinkers with Stark's mind?

Paolo Giandoso: My favourite test shot was the one where the Scarlet Witch warps Tony Stark's mind. I prepared many "wedges" showing different degrees of visibility of the effect, from practically invisible wavelike air distortion to a veritable storm of tendrils raging around Robert Downey Jr.'s head. It was also fun to visualize if and how the tendrils would "enter" the head of people, and how invasive this effect would appear.

What was most challenging about designing how their powers would look?

Paolo Giandoso: Two of the most challenging aspects of designing this sort of magical effects where the integration of colored light in bright environments and the design of animated patterns. It is in the nature of glowing things to appear better in a dark environment, especially a light of a scarlet hue as Wanda's. When you place it in a daylight environment, suddenly it looks less interesting and more washed out — more light pink or yellow than red. It loses all of its charm. You can make the effect darker, but then it stops being read as "red light" and becomes a more opaque, bloody form of energy like the Aether from Thor: The Dark World — thus losing its essence. In the end, we figured that it was better for readability that her hexes would be displayed on a dark or at least mid value background. Also, a cold cyan environment like Baron von Strucker's underground base would be ideal for making their power stand out nicely.

Another challenge was how to approach the design of an animated effect. Trying to describe something that moves fluidly and constantly with a single picture is a hard task because a good portion of its character is defined by its evolution in time. A single frame will appear uninteresting and empty because it is taken out of context. To compensate this, it comes natural to add a lot of details to it, but then when you try to put that concept in motion the effect will look overcomplicated and unelegant.

I think the best workflow in a effect design is developing the visual look on a few selected keyframes while at the same time studying the motion of the effect itself as a traditional 2D effect — with simplified lines showing the pattern of movement in an animated sequence done on the live-action plate. 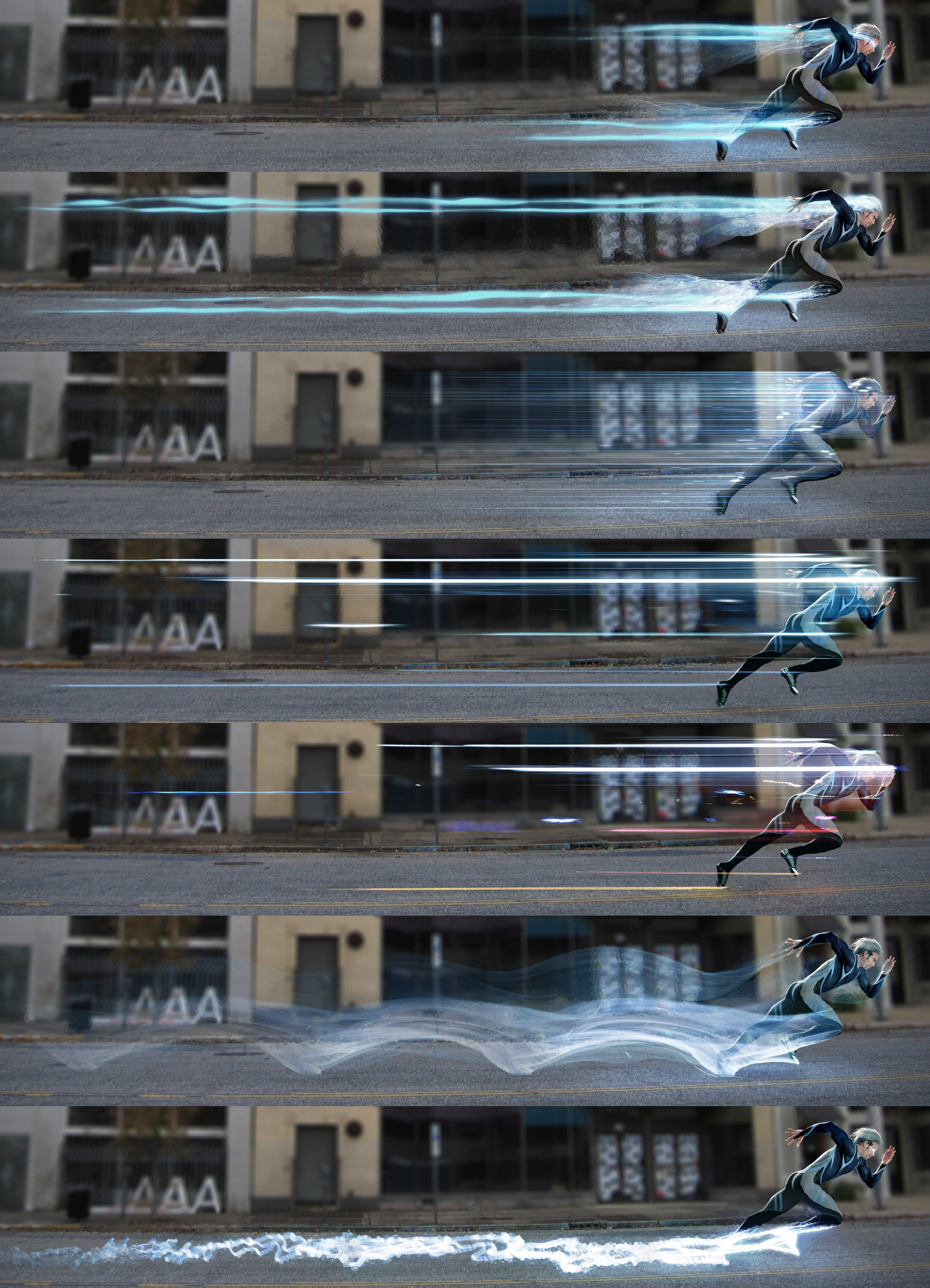 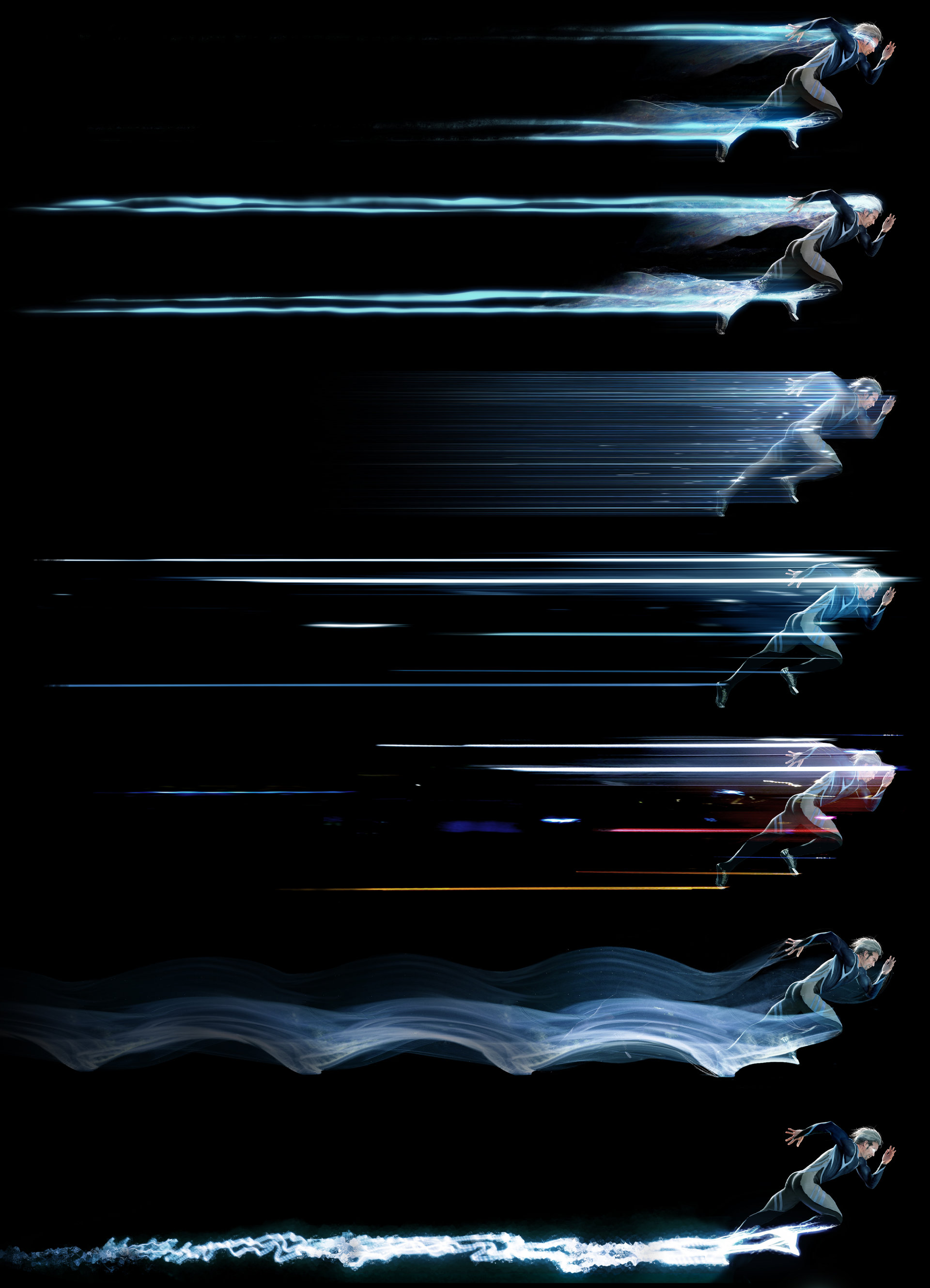