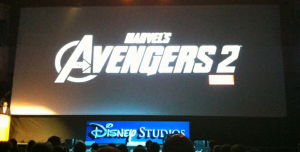 Joss Whedon recently sat down with Gizmodo Japan and Kotaku Japan for a pair of interviews leading up to the Japanese release of The Avengers, and Screen Rant did their best to translate the highlights. Along with a lot of the same boilerplate you get in any press junket interview for a major film, there were a few kernels of information about The Avengers 2 that managed to slip through. First of all, The Avengers is reportedly being perceived as a valuable "brand" that will be used in marketing the TV series Whedon is reportedly developing for ABC. Little is known about exactly what the show will be yet, except that it will be set in the Marvel Universe. Rumor has it that actual superheroes won't be the stars, with a more police procedural flavor to the affair. Whedon also said that he struggled with writing a script that gave all of the many characters in The Avengers enough screen time. He'll have to continue struggling with that some in the sequel, though, becuase Whedon says that during The Avengers 2, he wants to make the film itself feel smaller and more personal, but he also wants to open up the borders of the story and the team's lineup. At least one new member is already in the cards for the next film, according to Whedon, although it's not clear whether that character will be Ant-Man, whose presence in Marvel's Phase II films is already known, or somebody else is unknown. The Wasp may be an early favorite, as Whedon concedes that he had wanted to introduce her in the first film but couldn't make it work. Whedon says that while working with Marvel Studios President Kevin Feige, one of the things they decided was that they didn't want all of the solo films to have guest stars galore. The Avengers was special the first time around in part because it was the first time you'd ever seen a lot of the characters onscreen together. Now that they've fired that particular bullet, Whedon says he wants to maintain that excitement every time they get together--something that could be  hard if they were always hanging out in the solo films. As they did before The Avengers, claims Whedon, each of the films needs its own identity and to stand or fall on its own merits. This means that you don't have to see every film to understand The Avengers, and that you don't need to see The Avengersto understand any other film. "For each film, Whedon believes each character should be treated as if it's the only chance to use that character," writes Screen Rant. That probably also has the effect--intended or not--of creating a buffer zone between the films so that if one of them were to be a critical and/or commercial failure, it doesn't drag the whole cinematic universe down with it. The Avengers 2 hits theaters on May 1, 2015.