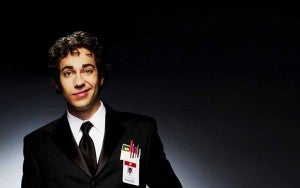 Zachary Levi, star of the cult favorite NBC show Chuck which ended earlier this year, is reportedly being wooed by Marvel Studios to replace Josh Dallas as Fandral in the second Thor film, which should begin shooting soon. The star, who has played a suave and arrogant action hero once before--albeit in animated form in Disney's Tangled--was in talks to take the role the first time around, but had to step aside when Chuck got renewed for its final season. He was a fan favorite for the role, although Dallas was well-liked as well so it's not as though there was a casting controversy. This time it's Dallas who has to back out of the sequel, due to his commitments to ABC's Once Upon a Time, which was renewed for a second season at this year's upfronts. The Hollywood Reporter says that negotiations haven't even begun yet, officially, but that Marvel is already prepared to make an offer. Whether that's because the studio thinks he's the only one for the role, because they want to get shooting faster or a little of both, it's good news for Levi, whose first post-Chuck TV pilot didn't make it to order for next season. The actor is staying busy, though, having just inked a deal for himself and his Nerd Machine posse to host Spike TV's All Access events for E3, Comic-Con and the Consumer Electronics Show. Thor 2, directed by Alan Taylor of Game of Thrones fame, will begin filming in July so that it can be in theaters in November 2013.