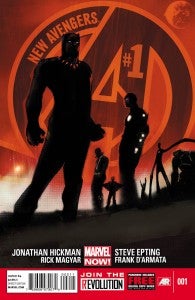 Jonathan Hickman, writer of the forthcoming New Avengers and The Avengers monthly series for Marvel's relaunch initiative, Marvel NOW!, took to the publisher's live blog earlier today to discuss his plans for the books with fans and share some preview art. Three upcoming covers in all debuted, including the first issue of New Avengers, which gives fans their first look at the book's full lineup. The series will follow the Illuminati, still reeling from the loss of Charles Xavier. "It's about the guys who quietly, secretly run the world," Hickman told fans. "It's thematically much different than Avengers. The plan I've worked out is that the Avengers are the utopian Avengers, the ideal ones we want, whereas the New Avengers are real world, they live in the dark, apocalyptic world as it is." After the publisher shared cover art by Jock (seen at left) which shows the lineup of the team in shadow, the writer told fans this book was going to be a bumpy ride. 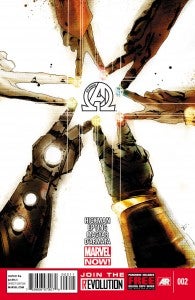 "My Avengers pitch probably could have gotten approved as is on its own, but if I hadn't done FF, I don't think there's any way my New Avengers would have gotten approved. I think it's gonna be a sleeper hit. It's so cool. I'm so jacked that I get to write it." The second issue of the series has a cover that features the members of the team holding out their hands to make what appears to be a Star of David. "The catalyst is an event in Wakanda with Black Panther, the only man who told the original Illuminati it was a mistake. Something occurs so earth-shattering he sees no other course of action than to call on them." Tom Brevoort added, "Going into Fantastic Four, Jonathan hadn't even wrapped up Secret Warriors. Going into this, people know from FF what a big thinker Jonathan is and how he plays the long game. It's an even bigger canvas here." It's hard to imagine anything much more earth-shattering than what has already happened to Wakanda in Avengers vs. X-Men, but Hickman teased, "This event is so huge than even the people in the Illuminati who do not currently like each other are forced to put differences aside." The other revelation today: Hyperion will be featured in Avengers #4, although fans wondered whether he would be friend or foe to the team. That issue's cover, by Dustin Weaver, seems to suggest that the longtime Grandmaster of the Squadron Supreme is in some distress. "The books will work in tandem," according to Hickman. "You don't have to read both, but they are two sides of the same coin. Two different stories." 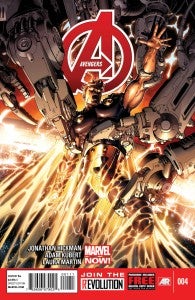 Whatever it is, though, the Avengers will apparently be prepared for it. "We will see the back story of how Iron Man and Captain America have been quietly building a contingency plan for the day that comes in issue #1," Hickman said. He also told fans that the large roster seen on the various different variants and most notably on the interconnected variants that seem to show more people than you'd expect to see on the team aren't lying to you. "One of the first things we all agreed on is that the roster should look more like the world," Hickman said. "So far we've seen the biggest and most iconic characters, but as we reach issues #7 and #8, we'll see more new characters and characters we're reviving or recreating. Eventually there will be 24 characters. 12 will be either female or minority characters." That's sure to split fans right down the middle, making some people very happy and others grumble about tokenism--as more or less any change to an iconic superhero team tends to do.

Brevoort joked, "You're talking to the man who took Fantastic Four and made it a book about 27 people."

Added Hickman, "We have monthly books with a lot of these characters, so if you write an Avengers book with only those guys, you limit yourself in terms of what you can do with character development. We're creating a structure where those characters develop in their own books, and I'll read those books, but it's the other characters who really evolve in Avengers." The writer also echoed something that had been said over and over again by DC writers when they were setting up the New 52 last year: The same old villains breaking out of the same old jails is getting a bit tired. "We need new bad guys. I'm making a lot. Will you see some traditional Avengers favorite villains? Of course."

Who are the New Avengers? Previews Abound