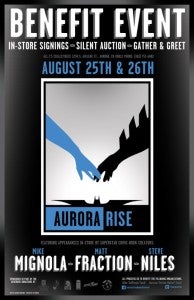 Matt Fraction may have already had two big announcements from Marvel Comics today, but that doesn't mean you're done seeing his name yet. He's also one of three guests of honor at the Aurora Rise benefit later this month at All C's Collectibles in Aurora, Colorado. The benefit, announced last month, will take place on August 25th and 26th and, in addition to Fraction, will feature Hellboy creator Mike Mignola and 30 Days of Night's Steve Niles. The final version of the poster also includes logos from a number of sponsors for the benefit, including Image Comics, Skybound, Dark Horse Comics and more. The event will feature not only personal appearances and signings by creators, but a silent auction on-site, and eBay auctions as well that will be branded with the "Aurora Rise" logo. At the event's Facebook page, set up on July 25, the comic book retailer has links for charities accepting donations on behalf of the theater shooting victims, including a song composed by The Dark Knight Rises' Hans Zimmer (who scored the three Christopher Nolan Batman films and will score the upcoming Man of Steel), titled "Aurora." Supporters can download that song for as little as ten cents in a name-your-price style purchase system with the proceeds going to benefit the victims of the shooting. "This is about community," said Dark Horse's Aub Driver in late July. "This is about bringing the community of both Aurora and Comics together. This is about standing as one in the face of evil and knowing that one common factor, our love for comics, can unite us."