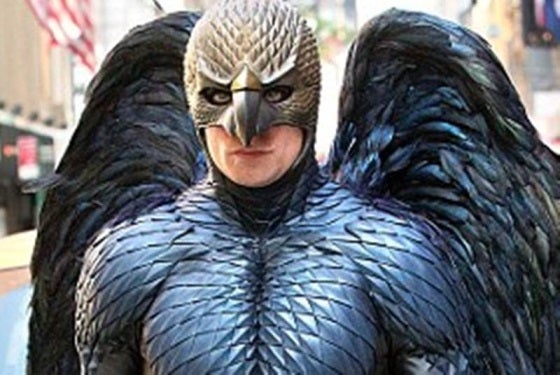 Alejandro González Iñárritu's Birdman will hit theaters on October 17, Deadline reports. "It's the heart of the fall, and a great time historically for us with films like Sideways, 12 Years A Slave, and historically Slumdog Millionaire and Black Swan," Fox Searchlight co-president Stephen Gilula said of the timing of the release. There had been rumblings that the filmmakers might try to finish it in time for spring and summer film festivals. "We've had great success launching films at festivals, but this hasn't been screened for anyone, despite the speculation. Alejandro is famous for his meticulous work in post-production, and this film is unusual for him in that is has some visual effects, and an unusual sound design. The most important thing is to make sure that the film is right." The film stars Batman's Michael Keaton as a washed-up actor best known for playing a superhero role. The black comedy revolves around the actor's attempts to mount a stage production in the hopes of revitalizing his career and family life. While there are some color-scheme similarities in the look of the characters, there is no indication that the titular superhero in Birdman is related to the Hanna-Barbera character of the same name. Many of those involved are no strangers to comics and comic book-related properties: Bored to Death's Zach Galifianakis, The Incredible Hulk's Edward Norton and The Amazing Spider-Man's Emma Stone also star alongside Andrea Riseborough, Amy Ryan and Naomi Watts. Director Alejandro González Iñárritu is best known for his films Babel (starring Brad Pitt), 21 Grams (starring Sean Penn) and Amores Perros (starring Gael García Bernal).

Birdman Coming to Theaters on October 17