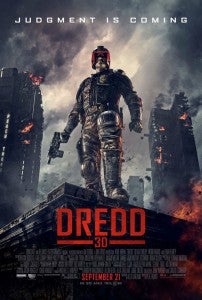 It's not the howling demand that Sylvester Stallone made it, but more a statement of obvious fact. In a new clip from Lionsgate's upcoming Judge Dredd reboot Dredd, coming to theaters in three weeks, Karl Urban's Judge Dredd addresses the rioting members of the Peachtree community, letting them know who's boss. "I am the law" is something that's been incorporated into just about every ad for the film, given the popularity of the catchphrase the first time around (it's one of the only things anyone remembers from the Stallone version), and here it gets what amounts to its own TV spot. Check it out below.